A Sage Suggestion for Saget 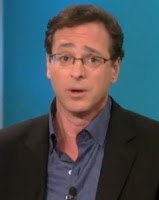 I've never particularly been a fan of the comedian Bob Saget.

Even though he comes from near where I live, I never quite bought into the all American guy-next-door humor he used to  personify on Full House or as the host of America's Funniest Home Videos.   In recent years, of course,  he's sought to dramatically change his image into that of a "blue" comedian.

Blue? This guy's so blue the sky is considering infringement litigation.   Blue?  He's so blue that ... well, let's just watch him in action at a morning meeting with his writers just the other day:

It may be hubris on my part,  but nevertheless here’s my sage suggestion for Saget:
Image change has its virtues, but not change for the purpose of spouting low-rent unfunny material that's dirty just for the sake of being dirty.  True, George Carlin successfully changed careers mid-stream, but  he transformed himself into who he was, not who he thought it was cool to be.
It would behoove you to develop an intelligent observational approach to comedy that provokes thought along with laughter rather than cheap laughs based on four letter words.
And,  Mr. Saget?
F*ck, F*ck, F*ck, F*ck, F*ck, you fucking moron!