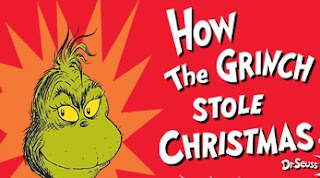 And Fenced It Through Detroit!

The Original Cover of a Classic.

Not often does a bombshell hit the literary world like the one that exploded late last week!

Especially when it comes shortly before the March 2 birthday observance for one of  the most beloved authors of our time and the one upon whom the bombshell squarely landed.

According to his recently disclosed  private papers, Theodor Geisel --- much better known to the world as Dr. Seuss --- was in truth a  hedonistic nihilist who believed that life had no purpose, the only logical response to which was to indulge the pleasures of the body with an endless barrage of alcohol, drugs, and sex.

"Make no mistake," said the author's nephew Lamont "Gus" Geisel, "this guy had more tail than a petting zoo!"

Just surfaced last week and fully catalogued by Gus Geisel,  the "Dr. Seuss Papers " reveal A Portrait of the Artist as a Scunge Man whose major literary influences were Charles Bukowski, Henry Miller, and the Marquis deSade.  (Geisel Listing 41-15j).   His original sex-drenched illustrated books were carefully edited and expurgated by his publisher Rancid Press, however,  when even Bukowski threw up after reading them.

The author's life tale is a lurid one.  Expelled from public school for flunking home room,  14-year-old Ted Geisel left his native Massachusetts for a journey of  personal discovery and exploration which took him to Buenos Aires,  Rio de Janeiro, and El Segundo CA with only occasional trips back to Massachusetts for clean socks.

Geisel  rejected Christianity early on because "Jesus loves me, but I want to see other people" (Geisel Listing 79-5z),  and turned to Judaism but rejected it as well when he bit into his first piece of Hanukkah Gelt and discovered --- as all Jewish children must --- that the gilt packaging is far tastier than the chocolate inside itself.

From then on, Geisel embarked on a lifelong nine (9) continent spree of alcohol and drug-ridden debauchery and perversion,  and no, that wasn't a typo, an entire new continent  had to be invented to fully house Seuss' massive profligacy,  the sheer magnitude of which caused Keith Richards to famously utter "Has the man no shame?" (Geisel Listing 03-9n)

Taking the name Dr. Seuss because he had handled so many drugs he had come  to  actually believe he was a doctor, the author penned the original versions of many of his best loved works,  including The Cat with the Hat in His Lap, How the Grinch Stole Christmas and Fenced It Through Detroit, and Horton Humps a Who.  To his dismay, all were dramatically altered by Rancid Press.

"My uncle was especially upset that the cannibalism theme was wholly omitted from  How the Grinch Stole Christmas and Fenced It Through Detroit," commented Gus Geisel, "as was the sudden acute myocardial infarction suffered by the Grinch when his heart suddenly grew three sizes that day." (Geisel Listing 67-3p)

A rare copy of Dr. Seuss' unedited masterpiece Oh, the Lame Places You'll Go is believed to exist and is driving Gus Geisel crazy that he can't catalogue it under his annoying system. "The manuscript will likely be sold at auction for millions," remarked Gus Geisel, "unless the owner is some incredible moron who's stupid enough to post it for free on the Internet!"

Etched on Dr. Seuss' tombstone are the following words from his classic Green Eggs and Ham and the Board of Health:


"Could you, would you
with a goat?

Ironically, those words actually did make it into the final version of the book Green Eggs and Ham. (at pages 42-43)

"My uncle," reflected Gus Geisel, "would have been pleased." 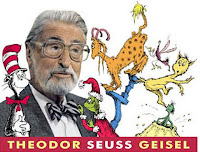