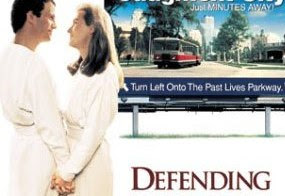 "Next we've got a 66 year old Jewish guy from Philadelphia, a Mr. Perry Block. First person we've ever gotten up here who died by whining."

"Mr. Perry Block, I'm sorry to have to tell you this, but YOU'RE DEAD!"

"Dead? You mean, like an extended version of my weekends?”
"Not that bad, Mr. Block, but a lot longer.”

"Judgment Dental!  Like in the Albert Brooks' movie Defending Your Life?  I love that movie!”
"No, no, Mr. Block! That's Judgment City.”
“Where's Mr. Brooks? Where's Meryl Streep? Even dead, I want selfies!"

“No, Mr. Block, this is the first stop - Judgment Dental. Here we judge your dental care."

"Who are you?"
"I'm the Tooth Fairy.  And you'll notice I'm a chick and I look nothing like Dwayne Johnson."
"Good. Finally one place that guy's not!  What happens now, Tooth Fairy?"

"You do that frequently?"

"If by frequently you mean as fast as my fingers can open the next can, it’s probably bordering on frequently."

"And here you are at nighttime that very same day, brushing your teeth."

"It's Crest with Chocolate Morsels."

"Well, you want me to be incented to brush, don't you?"

"That's not true! My toothbrush was in the shop. I didn't get a loaner..."

"Excuse me, but shouldn't I have an advocate?  Where's actor Rip Torn?"

"Oh, sorry. He's trapped near the Inner Circle of Thought."

"I knew it! That movie was so accurate!"

"I went to take mouthwash and accidentally took a swig of aftershave."

"And promptly did a spit take into the mirror, didn't you?"

"Yes, and it got a much bigger laugh in the movie than here."

"Here's the final day we're going to visit: 1/27/12. Who is this man, Mr. Block? Why does he look so gleeful? Why is he rubbing his hands together?

"That's right, Mr. Block. You had the next appointment that morning with Dr. Kropotkin. He was rubbing his hands together because your mouth alone sent his three kids through college and bought him a condo in Boca."

"It’s true. Some people had to wait six months for an appointment. Me, he gave a Bat Signal."

"I think we've seen enough. Mr. Block, I'm afraid I have no alternative but to send you to ..."
"Tooth Fairy! Tooth Fairy!"

"We made a mistake! Mr. Block is not dead! That last whine turned out to be a high-pitched burp."

"Well, then, Mr. Block, you have a second chance. I hope you've learned your lessons."

"I have, Tooth Fairy!
From now on I will brush with an effective decay-preventative dentifrice as part of a conscientiously applied program of oral hygiene and regular professional care. And after all these years I will finally look up the word ‘dentifrice.’ "
"That's what we want to hear, Mr. Block.  Good luck to you!"

"Tooth Fairy, before I go?"

So remember to take great Dental Care, folks.  You don't ever want to find yourself having to be .... 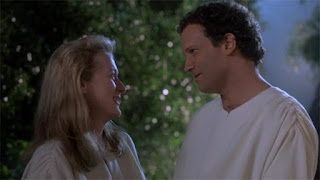 Note: I happened to watch one of my favorite movies, Defending Your Life, the night before a dental appointment.  Somehow this was the result.

Now watch one of the funniest scenes in the movie.

I read this out loud to my husband, as well as I could after rolling around on the floor, holding my aching sides.

Where, oh, where can I get some of the Crest with Chocolate Morsels?

I'm afraid I can't tell you that.

I don't want you ever in front of the Tooth Fairy having to be: DEFENDING YOUR TEETH!

My teeth need no defense. In fact, my teeth are my defense.

I've no doubt of that. And given my level of dental care, my teeth are my offense!

Yes, it's always good to have that hit of sugar after the dentist visit. Remember when you used to get candy after you were done, ha!

My dentist, Dr. Kropotkin, used to apply frozen Milky Ways instead of Novocaine.

I understand of late he is dating Salma Hayek.

No, I can't remember back that far, Libby. Nobody gives me candy today. In my case, the dentist gets most of the candy in vacation homes.

As long as I have any teeth left it is.

Like is much simpler here in Arkansas as we only have one tooth to defend. I like to treat mine like a Confederate monument. I hold rallies around it on weekends and run over any dentist with my Monster Truck who tries to get close to it.