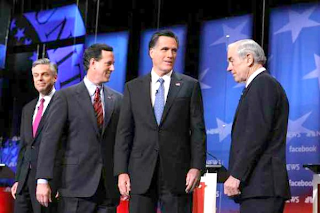 Ron, weren't you only 37 when all this began?

Doesn't it seem like the Presidential campaign has been going on forever?

And the actual election is still almost a year away.

I know what you're thinking.

We've just got to find a way to make this process longer!    Here's a few ideas:

Hold Primaries in Other Countries.   C'mon, Ron Paul,  explain your views on foreign aid to Israel and Egypt.   Rick Santorum, you're eager to tangle with Ahmadinejad, let's see you earn his vote.

Rick Perry,  let's see you campaign in Great Britain, where you're required to speak English!

You Moderate the Debate.  Why should Wolf Blitzer have all the fun?  Got a  microphone, rec room, and ample supply of dumb ass questions?

~ "Mr. Santorum, why do you always have a facial expression makes it look like you've just inhaled next to Russell Brand?"

~ "Mr. Paul,  you'd be the first President with two first names since Chester A. Arthur.  How would you like to wear fake muttonchops if we could get 'em to match your fake eyebrows?"

~ "Mr. Gingrich,  you've been married three times and had multiple affairs. How do you do it  when guys who don't have a face like Kirstie Alley's butt can't get chicks?"

All Candidates Must Host SNL.   Could the show possibly be any less funny? Is it possible for even Jon Huntsman to do a decent Jon Huntsman?   Beauty Part: Boy, would this elongate the process! There are only about three new SNL episodes a year and Alec Baldwin is contractually obligated to host all of them.

Candidate Term Papers.   Each candidate must read Middlemarch by George Eliot and write a term paper, twenty-five pages, double-spaced, with footnotes.  (Note:  Any candidate who properly identifies George Eliot as a woman will be immediately eliminated from the race.)

Send the Candidates into Space.

Bring the Candidates Back from Space. (Optional)

Feel free to add your own ideas to these humble few and know what?  Before long we'll have Presidential campaigns running almost as long as geological periods of the Earth.

Which all  goes to prove what the only conceivable thing worse than the current process for electing a President of the United States of America would be.

One additional minute of it.

Campaigns remind me of the old game of London Bridge where the 'bridge' players make all sorts of promises to get you to join their side.

And we spend our time obsessing over them while everything around them (and us) is falling down!

To quote Matt Taibbi, "the presidential election is a drama that we Americans have learned to wholly consume as entertainment, divorced completely from any expectations about concrete changes in our own lives." Too bad the entertainment is so weak! Or maybe it only requires a stronger tolerance for inanity than I have. Either way, I chuckled aloud at your "Bring the Candidates Back from Space (Optional)."

Yes, the process for electing a President in this country is a travesty and a joke, a shameful disgrace for the supposed preeminent nation on the planet and an utter embarrassment in front of the rest of the world.

Other than that, it's pretty good.