Why Superman Hasn’t Saved You Lately from Marauding Aliens 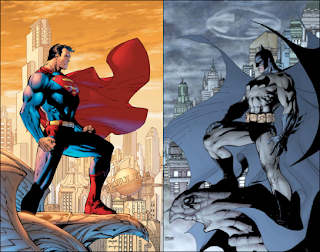 For as long as I can remember, I’ve wanted to be Superman.

Or even Batman, although I’d prefer being Superman. The Man of Steel is faster than a speeding bullet, more powerful than a locomotive, and able to see through hot women’s clothing in a single bound, making powers 1 and 2 more or less superfluous.

Yeah, I’d rather be Superman. But most of my life all I’ve ever succeeded in being, damnit, is Clark Kent!

What I truly can’t accept, though, is that there really isn’t any Superman, and there’s as likely to ever be one as Sarah Palin being elected president of MENSA. There’s just too many improbabilities.

Superman grew up from Superboy to a guy in the prime years of life who can pretty much do anything, including speak in front of a group of 25 or more lawyers without sweating. But that means Superman’s going to keep growing older! Nobody wants a 147 year old blob of wrinkly flesh hanging around that’s impervious to nuclear attack, let alone a plastic surgeon’s scalpel. Blue and red leotards wrapped around a tush begging helplessly for liposuction spells a dude who’d be lucky to get my spillovers!

And of course …. Superman, Superman, I wish I could fly like Superman!

But what about the rights of the already indigenous residents of the sky? At the speed Superman flies, there’d be scores of mid-air fatal fowl collisions daily, generating litigation that’d have PETA setting up headquarters at the Fortress of Solitude and poor Kal-El frantically squeezing coal into diamonds just to pay his legal bills!

Who cuts Superman’s hair? How does he clip his nails? Does he kill passers-by when he farts? When he flushes, where do the excremental remains spend eternity?

All right then, if Superman can’t exist, can we at least get ourselves a Batman here? He has no superpowers --- just peak physical conditioning, superior intellect, an arsenal of Bat-shaped weapons and vehicles, unlimited time, and almost as much money as Oprah makes each time she draws a breath.

Would anybody think that Batman’s alter ego works the lingerie counter at Target? “Sorry, Commissioner Gordon, I know the Penguin is running wild in the streets of Gotham, but I’m not off work until 11:00 tonight, and my supervisor’s been riding my ass all week!”

At least Batman seems to have broken up with Robin, the annoying-as-hell Boy Wonder. At 16 years old, Robin ought to be thinking about snuggling up with someone who wears make-up other than the Joker.  And is there anything credible about the bright red and yellow costume? While Batman’s decked out in a dark blue and black camouflage suit, Robin's as inviting to criminal types as a Coney Island shooting gallery!

We love our superheroes because in an apparently God-less universe we want somebody powerful to swoop in and care for us, end crime and poverty, capture Bin Laden, and on certain days – yes - kick the living crap out of our boss or spouse.

Jerry Siegel and Joe Shuster, the two young and unpopular Jewish boys who in the 1930’s created Superman, must have felt much the same. They devised someone all powerful because they --- and most of America --- were feeling very Clark Kentish, powerless in very perilous times. And nobody but nobody was seeing through women’s clothing back in those days except the editors at National Geographic!

So it’s a dose of cold water to most of us that in reality there’s never going to be anybody invulnerable around to save our butts, powder them, and trundle us contentedly off to bed.

Unless of course, I ever get to be Superman … or even Batman.

I promise to always save you from marauding aliens.

As long as you agree never to laugh when I bend steel in my bare and very saggy breasts when I’m 147 ....

Neat post. You still haven't got the hang of tags, I see. What are the chances of someone looking for 'Robin - you little suck-up dirtbag'?

As a lifelong Superman fan let me see if I can answer a few of your questions.

"Superman grew up from Superboy"
Actually, according to current mythology Superman didn't get his powers until he was 18. Before that he was athletic but not "super".


"At the speed Superman flies"
Nothing we currently have flies as fast as Superman (around the world in a few moments).

Who cuts Superman’s hair? How does he clip his nails?"

He uses his heat vision & a mirror.

"Does he kill passers-by when he farts? When he flushes, where do the excremental remains spend eternity?"

By the way - all Superman ever wanted was to be Clark Kent, so you got one up on him.

Lexi,
You're right. I've been doing tags as comedy since the start of this blog and just recently learned that maybe I'd get a few more followers if I take them seriously. So how about these:

That ought to get me some more followers, and classy ones too! Thanks for reminding me to walk the straight and narrow, Lexi!

Thanks, Man, for your enlightening comments.

I think we are closer to having a real superman on the planet with your insights.

Apparently the current mythology conflicts with the Superman legend during my peak comic book reading years in the early 60's. Then Superboy clearly had superpowers, was revealed to the world, and had adventures on earth, distant planets, and in the future where he was a member of the Legion of Superheroes and had kind of a thing with Saturn Girl. (So did I, as well as with the "much hotter than Lois Lane" Lana Lang!)

I agree that nothing flies as fast as Superman who apparently flies to distant galaxies without having to take a breath. Thank you for clearing up the issue about hair and nails. Superman always looks "mahvelous" and now we know why.

All Superman ever wanted is to be Clark Kent? What, is he crazy? I'm sick and tired of getting wedgies!