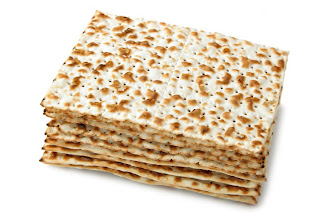 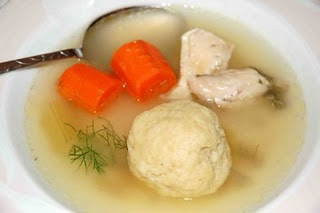 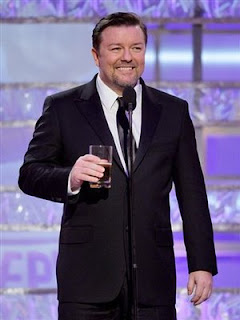 Seems to me British comedian Ricky Gervais was a strange choice to host the 68th Annual Golden Globe Awards.

(Yep, somebody must have gotten into the Manischevitz early!)

"Hello, I'm Ricky Gervais. Welcome to the 4,387th Annual Jewish People’s Passover Seder Ceremony live from Perry Block's house in beautiful Havertown PA. It's going to be a night of partying and heavy drinking, or as Charlie Sheen calls it, 'Not bad, but what happened to all the begatting?'

Now before me is the Seder Plate, and round the plate are symbols of Passover. We partake of the Bitter Herbs to remind us that the bitterness of slavery was almost as bad as having to sit through The Tourist. We eat the mixture of apple, nuts, and cinnamon known as Charoses to remember the mortar used to build Pharoah’s pyramids when the Jews were in captivity --- something Robert Downey Jr. is very familiar with. And the Roasted Shankbone from a Lamb is meant to signify Sara Jessica Parker’s profile.

Early in the Seder, I’ll break off a piece of matzo, wrap it in a napkin, and hide it. 'What’s it all about Afikomen?' you ask. Well, all the children look for the matzo, and the one who finds it gets a dollar! And yes, Demi Moore: Ashton Kutcher is eligible to participate!

The Afikomen could be anywhere in the house. Behind a bookcase, under a pillow, or even in Cher’s cleavage. What a lesson for Hollywood! You can always make money by reaching in for something old, repackaged, and done to death!

The Four Questions, a very moving part of the Seder, are next traditionally asked by the youngest person present. Since the youngest person here happens to be a budding scientologist, I can fairly well predict that two of those questions will be 'Wondering why Tom Cruise is at our Seder tonight, Mom and Dad?' and 'Mom, do you happen to know a good place to pick out drapes?'

Actually, the real Four Questions are inquiries about why this night is different from all other nights, and they are:

Next we’ll tell the story of the Exodus from Egypt itself, recounting each of the Ten Plagues --- otherwise known as any random ten minutes from Tracy Morgan: Black and Blue on HBO --- and culminating in the Parting of the Red Sea, something which Bruce Willis wishes he could do with his hair. By the way, some of the actual plagues --- blood, pestilence, darkness, wild beasts --- sound like something straight out of a disaster movie.

No, I’m not talkin’ about The Tourist again!

Then it will be time for us to open the door to welcome the venerable and centuries-old Elijah the Prophet to our Seder. I don’t want to say that Elijah is long in the tooth, but when it comes time to let him in, Hugh Hefner better not turn his back on Crystal Harris. That cup of wine on the table for Elijah might not be the only thing that's going down!

Finally, we’ll finish by having Grace after the meal. About which Charlie Sheen would say 'Now you’re talking!'

Before we begin, I’d like to offer a short blessing:

Blessed art Thou, 0 Lord our G-d, for makin' me an atheist. Except for tonight, when being a Jew is the best thing going because all this stuff LOOKS AND SMELLS FANTASTIC!

L’Chaim! And wake the hell up, Charlie Sheen!"
Posted by Perry Block at 11:35 AM

You are so twisted. I like that in a superhero.

I loved this Perry!! That Golden Globes ceremony was uncomfortable, wasn't it!?!

I have learned more about Jewish tradition than I ever asked.

Poor Tim Allen's career. I didn't know he was Jewish.

I kind of wish I has watched the Golden Globes now.

Marian,
I am twisted? I always behave at Seders, unlike Mr. Gervais.

Alright, I do start throwing matzo around like frisbees when I don't find the afikomen. But I've never attacked Cher either verbally or physically.

A superhero? Ehh, we'll see how the tights come out of the dryer.

Yes, the Golden Globes were very uncomfortable because you and I were again not recognized for writing! I think it was Mr. Gervais' empathy for us that unleashed his scathing tongue.

Yes, I have taught you much about the Jewish religion.

But how do you know I am teaching you the truth? I may be fabricating some of the information to have fun with you.

For example, that bit about so-called "circumcistion." You bought into that! What people would do something like that to their children! Preposterous!

I love having fun with naive folk such as yourself!

Tim Allen isn't Jewish. Nor is anyone else in the piece above except that Sara Jessica Parker is half-Jewish.

P.S. But I still love you, Melanie! And your last name Sherman could be Jewish.

Any time you want to think conversion, I'll call you .....