The Worst Holiday Ever 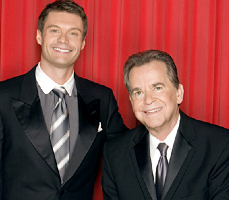 (r to l) Out with the Old, In with the New
Welcome to the Worst Holiday Ever!

It’s that special time of the year that perennially signals the re-realization that the last 365 days have zoomed by like 365 seconds and that not only have you once again failed to achieve your hopes, dreams, and aspirations, you can’t even find your comb.

And this we celebrate with noisemakers and party hats!

New Year’s Eve is a holiday by default. Christmas and Hanukkah have just ended but we’re not yet ready to stop all that fa-la-la-la-la-ing, dreideling, and wassailing, wassailing all over the town we've gotten used to. We want to pretend there is a “Wintry Season of Fun” that continues to keep rockin' on, but realize we need a marker to bring it to a close other than the first White Sale at Macy’s.

Thus, we have collectively commissioned New Year’s Eve as the Hired Hitman for the Holiday Season. After New Year’s Eve, the holidays are found floating in the East River and all tidings of comfort and joy must go at savings of 60% or more.

We celebrate this dubious occasion with three traditional holiday pastimes:

1) The Do I Sit Home Feeling Miserable or Check Out What’s-his-Face’s Likely to be Lousy Party? Guessing Game.

2) The Feign I’m Feeling Festive Now that I’ve Forayed Out into the 8 Degree Wind Chill and Turns Out I Don’t Know a Soul Here Except for That Bastard Weinstein! Charades, and

3) The There’s Got To Be, Just Got To Be, Something Remotely Edible Here Beyond Trail Mix Scavenger Hunt.

All of the above holiday traditions are enjoyed with alcoholic refreshment in the form of champagne which somehow was mis en bouteille in the very town where you live and has a “better if used before“ date and with lively and spirited conversation, which nobody seems to care to make with you!

New Year’s Eve also has the distinction of being the only holiday that dares to replace its patron saint. Dick Clark --- the heart and soul of New Year’s Eve from the time the first dinosaur decided it might look a bit spiffier for the occasion if it began putting on feathers --- has over the past few years seen his annual role shockingly diminished. Could anybody imagine Santa Claus, the Easter Bunny, Moses the Lawgiver, or any of the other great hallowed figures of the holidays being similarly sacked in favor of Ryan Seacrest?

“It’s that time everybody!” shouts our genial host, flicking on the TV and beginning to pass out champagne that comes from one of those cartons that looks like it ought to contain motor oil. From high above Times Square, the New Year’s Eve Ball begins to drop, along with my stomach.

Another year to be writing the wrong dates on checks until March. Another year of shattered resolutions, were I to ever make any.

Another year of existence on the planet now forever in the rear view mirror. Another year ahead of bizarre social trends, goofy new words, and uber-tattooed celebrities, and still I can’t figure out the 'poke' feature on Facebook!

Everyone in the room turns and stares.

But the damn ball never listens. Never has, never will.

Much to the relief of my host, that bastard Weinstein, and everyone else at the party, I’m back in the 8 degree wind chill and on my way home. New Year’s Eve is over.

I should be relieved, but I’m not. In a few hours comes the holiday that many think is even worse than the Hired Hitman for the Holiday Season: New Year’s Day.

Lol. What I want to know is, why are all the really satisfying New Year's Eves in the movies and not real life?

(My favourite is the one in Bachelor Mother with David Niven and Ginger Rogers.)

You're a novelist. Because real life sucks and novels and movies enable us to make it all seem better. Unless you're the Coen Brothers.

My favorite is "When Harry Met Sally," because what we've waited for all through the movie finally happens on New Year's Eve and Meg Ryan was in her most "crushable" days back then.

Don't remember the movie with David Niven, but I'll check it out. David Niven had the distinction of being an old looking young guy and a young looking old guy, the net result being that he never seened to age. Miss him a lot!

Oh, yes, I so agree. Though there isn't a Weinstein there is Bill, the next door neighbor who works at American Airlines. That's to differentiate him from Bill, who married Jessica but cheated on her and now lives alone in Tahoe.

Either way, they are both not fun.

AND, I have been seeing signs that some stores are getting ready for Valentine's Day. Ack. And *hic*

See you next year!

All the characterization is in place for your next story. Now just a modicum of plotting and your surprise ending. That would make it a happy new year for me!

As for Valentine's Day --- don't get me started on that one!

For Marisa and Perry--a free Valentine's Day story that I think you'll like:

I agree about New Year's Eve/Day. This holiday is the kid in school who is wildly popular although nobody actually likes him.

But you forgot to mention all the bills that still aren't paid and have accrued interest.

Plus, I don't even think anyone will kiss me at midnight. I'm now more depressed than ever.

Thanks, Marian, for the comments and the really cool story.

Any way you could write a sequel that features me and ..... wait, I'll give you my list of ususal suspects to choose from.

A kiss at midnight? Whenever I go to kiss someone at midnight, she always says "let's just be friends!"

Another reason I hate this holiday!