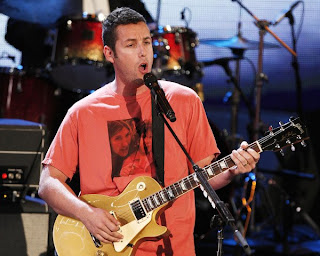 Originally I wasn’t going to put these two slightly out-of-date songs on the Nouveau Old, Formerly Cute blog site, but it’s cold, I’m lazy, and frankly, I’ve got nothing else.
Just think of it this way. I’m going to do a couple of covers for you.

The Hanukkah Song
No. 4
Put on your yarmulke, here comes Hanukkah;
It’s so much fun-akkah to celebrate Hanukkah.
Hanukkah is the Festival of Lights;
Instead of one day of presents, we get eight crazy nights!

When you feel like the only kid in town
Without a Christmas tree,
Here’s a FOURTH LIST of people who are Jewish,
Just like you and me:

Shia LaBeouf eats his Hanukkah gelt;
So do Jake and Maggie Gyllenhaal,
Though they’re both perpetually svelte.

Scarlett Johansson’s half,
I wish she were a full blood;
But Mila Kunis and Natalie Portman are 100 per cent,
As is the voice of Elmer Fudd (and Bugs Bunny too!)

You don’t need to Deck the Halls
When you got eight nights of bliss;
Cause you can spin the dreidel with Gene Simmons
And the members of Kiss (most Jewish!)

Put on your yarmulke, it’s time for Hanukkah;
Even after all these long years,
Howard Stern can still be too moronicah!

O.J. Simpson --- Still not a Jew!
But Jews do most of the voice-overs
On The Simpsons and Family Guy too!

The Good Wife's Julianna Margulies is now a big TV star.
But Noah Wylie --- another Jew ---
also got his start with her on ER.

Some people think that Jews are somewhat driven
(but they’re not); Guess it comes from watching
Entourage with Jeremy Piven!

So many Jews are in show biz;
Steven Colbert isn’t a Jew,
But every other damn comedian is!

Tell your friend Veronica,
It's time you celebrate Hanukkah!
I hope I get a harmonica (though most Jews can’t play it)
On this lovely, lovely Hanukkah.