Ghosts, Contractors, and the Invisible Man 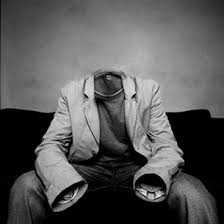 So is the Invisible Man.

Then there is that unique species of human being known as the home contractor.

I’ve have contractors suddenly become invisible when they were due to  show up at my house for all kinds of jobs from simple home repair to painting the house to putting a deck on the back.  I’m sure there’s someone somewhere who’s been left waiting at the contractor altar after signing the papers for the guy to put a heliport on the house, build a bowling alley in the basement, or install an ocean in the back yard.

Typically I will have met with the contractor about the proposed job for a few hours or more.  The contractor explains what’s involved in the job as well as his unique talents for accomplishing it.

“Don’t worry, Mr. Block.  We’ve been in business for 25 years.  We have a certificate of compliance by the Better Business Bureau and the Even Better Business Bureau, and references from neighbors and friends of yours as well as from world leaders like the late Winston Churchill and Mahatma Gandhi. We’re giving out a lifetime warranty too.”

"Okay, then, the kid who plays Young Sheldon on TV.”

"Much better!  Unless he later dies of a drug overdose."

Mr. Logan certainly seems substantial and creditable.  We arrange for him to start work next Monday at 7:00 sharp.

Comes Monday morning and I am up and ready to greet him, cup of coffee in hand at 7:00 A.M sharp

But the only people who arrive at my home at 7:00 A.M sharp are the hosts of The CBS Morning Show.

Oh, well, he’ll be here, I comfortably think. He’s probably stuck in traffic or having a quick early morning amorous interlude with his wife, or combining the two while driving with his wife to work if he’s so adept.

Whatever. None of my business.

Aly Velshi and Stefanie Rule of MSNC are here, but he's not.

Mr. Logan is either the last of the Red Hot Lovers or he’s stuck behind a pile up the size of Mt. McKinley.

I call his office and get his voicemail.

"Hello, this is Logan Painters.  We can’t take your call right now as we are out in the field on a job. Please leave a message at the beep."

Good to know he’s out in the field.  Unfortunately it’s not my field.

We’re still rocking around the clock the next morning at 7:00 o’clock, waiting for the Invisible Mr. Logan.

Monday melds into Tues, Tuesday becomes Wednesday and Thursday, and weeks pass, and you realize you have not hired a home contractor at all.

You have hired the anti-Michael Avennati.

Why does this happen?

So is the Invisible Man

Also known as the Home Contractor.

And don’t forget, my book Perry Block- Nouveau Old, Formerly Cute is never invisible. (Its sales, though, are something else).  I hope you’ll check it out.

Casino free spins no deposit video games select 빅카지노 from|to choose from} however maybe the slots with essentially the most eye catching slot themes are cartoon primarily based video slots. I have have} also confirmed that stopping the reels controls the outcome result} in the land-based USA and on-line free slots. I can not say that management works after hitting the jackpot; nonetheless, it has labored extra times with leads to getting the bonus and large wins. I agree with everyone who contributed to the article, which states the RNG just isn't RNG. I have have} confirmed over 12 years of playing in} land-based slots in the USA that slot machines are not random, as folks and others claiming to be specialists declare. I study patterns on a number of} hundred slot machine performs, playing in} each week.