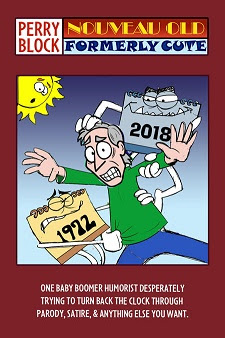 "This book was totally relatable, funny, and yes, really poignant ... I appreciate Perry's wit and fight. He's not going gently into that good night. Neither am I. Nouveau Old, Formerly Cute is a great read!" - Michele Young-Stone, Simon & Schuster published author of The Handbook of Lightning Strike Survivors, Above Us Only Sky, and Lost in the Beehive (selected by Oprah's Book Club)
“Perry Block offers up his ideas about advancing age in a funny and clever series of delightful musings … Perry brings his wit and wisdom to some everyday situations which will guarantee that you'll not only relate, but you'll be laughing out loud… By all means, buy it, read it, laugh out loud, and enjoy." - Joy Ross Davis, author of Emalyn's Treasure, The Devereaux Jewel, Mother, Can You Hear Me?, and more.

Loved the testimonials my friend.

It will probably say "Perry Block washed his underwear here, but there was not enough bleach. For him, there could never be enough bleach."

Thanks for writing, Russell!

I liked Traffic too, except for the kind where I have to select all the cars to post a comment and prove I'm not a robot on this blog.
My favorite song of theirs was "John Barleycorn Must get Drunk to Read Nouveau Old, Former Cute."

Is there still a problem? Is that why I get virtually no comments? I thought the reason was that the one guy who does write was scaring everyone else away! I guess the reason remains as elusive as "the low spark of high-heeled boys," and if I get any shorter I'm soon going to need to be a "high-heeled boy."

Yes, Blogspot is continually a problem. I just spent 5 minutes crafting a particularly clever response on another Blogspot site only to have it disappear when I clicked "publish your comment." I even hit the refresh button to see if it took, but it's not there. I didn't have the time or energy to leave another comment (which probably wouldn't take either).

BTW - I think elevator shoes might be a good option for you. Plus, you should get one of those fedoras like Truman Capote used to wear.

Sure the gift is appreciated - forever young.