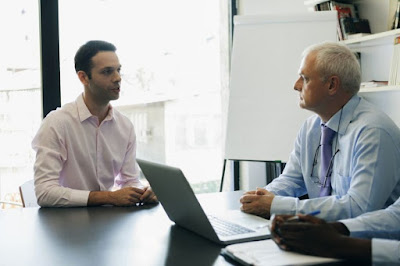 Note: That's not me.  I look much YOUNGER!

When did I first come to realize that the moon was over the mountain at least as far as my working career?

I was being interviewed for a job at the tender age of 57 or 58 because the Company I had worked for over a number of years had moved out of the area.

Friendly enough dude and the interview seemed to be going well.  Then I asked a question to display my interest in the company.

“Tell me about your management team, Bob," I asked.

It’s always nice when someone says you’ve asked a good question. Much better than being told “the answer to that question is self-evident and you’re an idiot.”

Not that that’s ever happened to me.

Did he actually say that they have a good strong YOUNG management team?

Most executives doing interviews these days are trained to avoid mentioning age, and most likely Mr. Johnson was so trained as well. But apparently he just hadn’t made the leap from not asking about age to expressing a preference for youthful over alta cocker vintage, not that Bob would know what an alta cocker is.

“We have a good strong YOUNG CFO named George Strapling,” Bob went on.

He’s two for two, I thought.

“And our new sales VP, Ralph Barkley is a good strong YOUNG marketing guy from Kropotkin and company.”

Three YOUNGs in a row!   I wonder if they have milk and cookies and naptime here too.

At last, I thought!

Bob has either caught on to today’s prevailing business wisdom or George Marchese’s age is lofty enough that he can join AARP without having to show ID.

“It’s hard to believe how much George has achieved at his prior jobs as YOUNG as he is,” raved  Bob.

I should never have doubted Bob’s proclivity for blithely making wrongheaded and illegal statements.

From there on in, the interview progressed OK, although I made sure to refrain from making references to the Truman Administration.

I made up that part.

I asked one more question before leaving, bracing myself for the answer.

“Can you tell me how old the company is, Bob?”

Of course. The answer to that question was self-evident and you’re an idiot, Perry.

I didn’t get the job, of course, but Mr. French’s transgressions were safe with me.

I’m not the suing type.


After all I’m not a good strong YOUNG applicant and frankly, I just don’t have the strength for it.

This is funny, but also quite sad since age discrimination does exist, but at the same time, some companies are so desperate by the lack of work ethic and cluelessness expressed by many Millenials, that they actually have a preference for mature workers. If you want to see something funny on these lines, check the video on YouTube called "I'll ask Siri." The older interviewer and the millennial job seeker are both fabulous.

I'll take a look. This happened but of course it's very exaggerated for comedy effect. I hope there are some good things coming for alta cocker workers.

They didn't deserve you anyway, Perry. They were probably wanting to be profitable. My employer told me my firing was part of their new Financial Fitness program. In other words, they didn't need us old farts who drew a decent salary when we could be replaced with young whipersnappers for half the money. Over half the people they fired (about 400) were over 50.

At least you got a good story out of the experience.