Your Five Minutes of News without Trump! 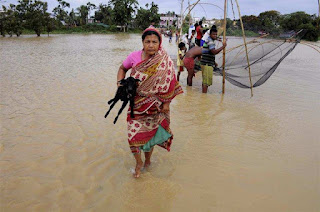 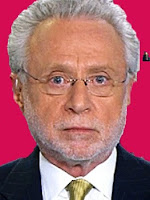 Much as I like to watch CNN and MSNBC, neither station provides anything resembling comprehensive news of the world.

These days it’s All Trump All the Time from the earliest morning recap of Trump’s outrages of the day before to the midday report on his up-to-the-minute daily disgraces to the late night review of the further deterioration of democracy wrought by Trump within the last 12 hours.
Important stuff, but what about the rest of the news?
“This is Wolf Blitzer, CNN News.
Today we’re introducing a new feature. Each hour on the hour we'll have Your Five Minutes of News without Trump! Exclusively on CNN.

Let's begin.
In India today at least 324 people have been killed in flooding in the southern Indian state of Kerala in what local officials say is the worst flooding in 100 years. Rescuers are battling torrential rains to save residents, with more than 200,000 people left homeless in camps.

This is Sanjay Ray, a 78 year old grandmother.  Everything she owns has been swept away in the rampaging waters.

'What can I do?  It is almost as bad as if I had to live under Donald Trump! Did you see his latest idiotic tweet?

The FAKE NEWS MEDIA is the Opposition Party.  It is very bad for our Great Country ... BUT WE ARE WINNING!

Go to the United States? No thank you, I'll rebuild here!'

And there is revolution in the African country of Bhatta where King Leopold the III has been unseated in a bloody coup by General Ralph Bakshi.

'There is so much we must do to restore basic order and decency to our country after years of misrule, corruption, and pillage by King Leopold,' said General Bakshi, speaking to victorious throngs in Bhatta Square.

'Fortunately, things are not as horrible as they would have been under Donald Trump! Did you see his latest moronic tweet?

The Failing New York Times wrote a story that made it seem like the White House Councel (sic) had TURNED on the President, when in fact it is just the opposite - & the two Fake reporters knew this. This is why the Fake News Media has become the Enemy of the People. So bad for America!

We must count our blessings!'

And finally earlier today, I spoke with Elinore Brotman, 8 year old musical prodigy known around the world who is in New York for a special concert tonight.

"Hello, Ms. Brotman, we’re delighted to have you here in New York.”

“I must ask you, Ms. Brotman: it's rumored there's a secret agreement among many in the musical community to keep it quiet that you have an intestinal blockage which may prevent you from performing tonight.

“There was no collusion, no obstruction.”

And that’s  Your Five Minutes of News without Trump.” Now back to 55 minutes of All Trump All the Time here on CNN.

If you hated this post, WTF, try it anyway!