A Serious Case of Premature Bonging 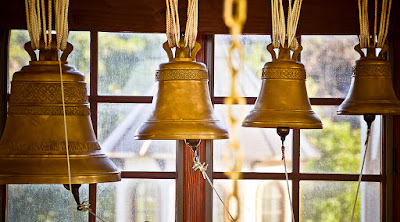 I tend to be late sometimes.

Oh, let’s be honest. I’m chronically, perpetually, pathologically late almost all the time since I was 5.

But even when I'm not late for yoga at 12:00 P.M. three days a week, there’s a sound that fills the air that fills me with dread that I'am late and about to get yelled at. Of course everyone’s mellow at yoga and nobody has yelled yet, but there’s always a first time.

That sound is church bells bonging from a nearby church that bong two minutes before the hour.

It's a serious case of premature bonging!

Not only does premature bonging terrify me that I’m at late for yoga, it probably terrifies everyone for miles around that they’re late wherever they’re headed as well.

“Reverend Trumble,” I said, “I want to talk to you about a case of premature bonging.”

“That’s exactly what I thought! I hesitated to say that to you because as a man of God, I thought you might banish me to - you know - hell.”

“No, I generally don’t do that kind of thing anymore.”

“Things really have liberalized with you guys lately, haven’t they?”

“Tell me about the premature bonging.”

"Your bell tower bongs routinely at two minutes before the hour. It makes me feel like I’m late for yoga and I panic and desperately start to think of excuses for being late.”

“Seems to me it serves as a worthwhile notice to you that you’ve got to hurry to get to yoga.”

“If it bonged a half hour in advance it would! That would tell me to turn off Let's Make a Deal, grab my yoga pants, and get out of the house! At two minutes to the hour all it does is give me a shrek!”

“I know the term. All right, Mr. Block, we’ll adjust the premature bong to a timely bong if you'll do one thing.”

"Be a little early from now on. For everything."

“Thank you for handling the problem, Reverend! Thank Jesus too.”

“I don’t think Jesus had much to do with the premature bonging, Mr. Block.”

“Because it sounds dirty.”

I'm perpetually late as well, Perry. And addng the word premature does make this post a little risque, especially for those of us who are perpetually immature.

I'm happy the good Reverend saw it your way. Better put your yoga pants on and head for class. It's almost 3pm eastern.

Or it could be a drug reference too. But I thought the other way as well. I guess if you and I are both late, what we could both use is some good premature bonging! Of the church bell ringing kind, that is.