Fatty Did It, After All 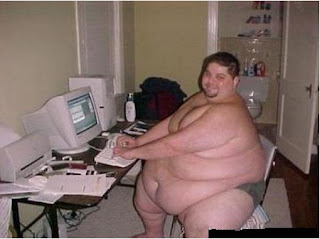 In a daring pre-dawn raid, an elite force of Donald Trump transition team members has stormed the one room New Jersey apartment of Ralph Plumpkin and seized the 400 pound Mr. Plumpkin, the man responsible for the recent massive hacking of  the Democratic National Committee.

"We got 'em!" bragged commando leader and soon-to-be National Security Advisor General Michael "Dr. Strangelove" Flynn, "and now we can Lock Him Up! You know, fear of fatties is RATIONAL."

President-Elect Trump stated that he knew Plumpkin was a danger to America as far back as the days when he was vigorously opposing the Iraqi War. “That’s because I know more than all the intelligence agencies put together,” noted Mr. Trump, “I have a good brain, and I know all the best words, like amazing, huge, and so important!” (which is two words.)

“As soon as I am sworn in I will have Plumpkin promptly water boarded,” added Mr. Trump. “That is, if we can find a large enough board and anywhere near enough water.”

It was all a mistake. Plumpkin merely "fat-fingered" the keyboard while trying order a dozen pizzas with extra-everything.

I say put him in charge of the FDA.

He's already in charge of the Department of the Exterior.

Maybe Trump will declare him a National Park.

The United States Plumpkin Park! And Trump and Putin can go for a romantic weekend as they stroll hand in hand through Plumpkin Park's Pubic Forest.