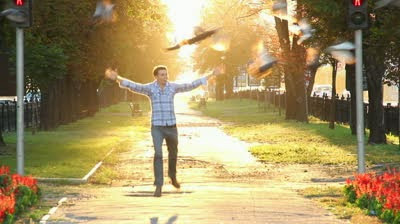 It’s been one hell of a terrible year!

Many beloved celebrities passing away (not that this doesn’t happen every year), the election of a dangerous demagogue as President, and our own personal mishigas have all combined to make year 2016 about as enjoyable as the Bubonic Plague.

What can we do?  Well, sometimes I try to focus myself upon what I call “Life’s Little Pleasures,” those usually small things in life that tend to make one feel a little bit better.

So tell me, Maria, what are some of your favorite things?  Well, first off, one favorite thing is you not calling me "Maria." Here are a few of the others, some of which are actually for real and not jokes:

1) A very personable and attentive waiter or waitress, especially if it's a waitress with big boobs.

2) The Oxford Comma. It is always right, just and appropriate.

3) Throwing bread to ducks in a creek, especially if you are with a small child, right up until the moment the ducks surround you and start making anti-Semitic quacks.

4) Being caught up and fully up to date in a project, assignment, or major task you’re doing.

6) Learning a new word and shortly afterwards reading it or hearing it used a number of additional times and finding it amazing that you had never heard that word before in your entire life, and now it seems to be everywhere!

10) Feeling yourself genuinely affected with emotion at hearing unhappy news or watching a sad story on television and thinking “gee, maybe I’m not such a self-absorbed, vacuous waste of an unfeeling human being as I thought I was after all!”

12) Fantasizing about what if you had incredible powers like Superman such as flying, bending steel in your bare hands, or being able to get Gal Gadot's phone number.

13) Sharing a box of popcorn with somebody with whom you feel close enough to eat out of the same box of popcorn with. (But no way buttered!)
14) Watching a movie on television on a true movie channel that shows the full closing credits (and closing theme music too!) without speeding them up, shrinking them and putting them in the upper left hand corner of the screen to promote some other dopey show on the main part of the screen, or having them abruptly and unceremoniously end to make way for a commercial with Flo.

15) Being asked by a friend to read something he or she has written and after you read it being able to tell him or her that you truly liked it without having to lie! Or maybe just a teeny bit.

16) Finding an interesting coin from another country in your change.

17) Discovering the shampoo that’s absolutely right for you and after using it, feeling like your hair looks thick, full, lustrous, and better than ever before, even though it still looks like shit.

20) The first day you finally feel you are pretty much over your cold.

21) Being in a room full of hundreds of people at a conference and even though you feel apprehensive about speaking in a group that large, raising your hand and asking a question and hearing the speaker say “that’s a GREAT question!”

22) Fantasizing about living in another period of time like the Middle Ages but still possessing your current knowledge, sophistication, and liberal views, so you are considered “ahead of your time.”  And not getting burned at the stake for it.

23) Reconciling your checkbook and getting it to come out perfectly the first time.

25) Having an opportunity to obtain a celebrity’s autograph and despite feeling reticent about it, going up to the celebrity, finding him or her to be friendly, and getting the autograph.  And a selfie too, if you're not too old to be intimidated by having a picture taken with somebody that way better looking than you.

26) Needing gas on a day that’s very cold and being in New Jersey where by law there’s an attendant to pump it for you and you don't have to get out of the car or do a damn thing!

27) Successfully parallel parking in a narrow space without scraping your tires, banging the car in front and/or behind you, or running over innocent bystanders.

28) A great cup of coffee that you didn’t expect in a shitty restaurant.

Perry! Don't tell me you really reconcile checkbooks! Banking online is the thing to do if you want to impress all your young lady friends!

Well, I'd like to impress all my young lady friends once I acquire some. That wouldn't be a Life's Little Pleasure, that would be a Life's Humongous Pleasure and a whole other list, even less likely.

I'm glad you mentioned the ducks making anti-Semitic quacks. I've always suspected that the AFLAC duck (though technically a goose)was a member of the Ku Klux Klan, otherwise known as the Jews & Nigger Haters Society.

And as far as #10 goes, that feeling is probably just gas. You really are as self-absorbed as you thought.

If you think ducks are bad, you should hear what crickets are actually saying - sexist pigs! As far as No. 10, yeah I'm an asshole. Scratch that one off the list.

One nice thing about being deaf is I don't have to listen to those damn crickets.

Happy New Year, buddy. I look forward to weaving you into more stories in 2017. :)

Looking forward to it as well. See that I get the girl! Make her a Scarlett Johannson clone. Is that too much to ask?

That would definitely classify as fiction, or should that be fantasy, or maybe fantasy fiction. Either way, it's an extreme stretch of the imagination.

I'll see what I can do, but she'll have to be blind, deaf, and dumb (or dumber) to make it work.

None of that is a problem. Just give me big boobs and you can drop sense of smell too.