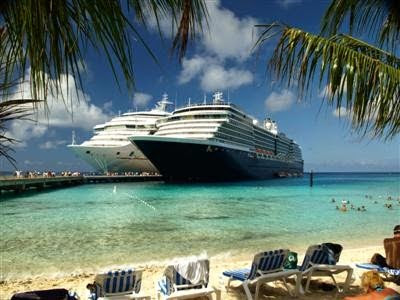 Plus exotic ports of call!
Yeah, sure there are ...

I frequently receive that phone call with the recorded female voice telling me I have just won a fantastic prize.

"Hello!  I am happy to tell you that you have been selected to receive an all-expenses paid two week cruise to the Caribbean!"

"There is no catch.  You'll chart a course from New York City aboard a luxury liner that makes the Queen Mary 2 look like the Wreck of the Hesperus.

Do they think I was born yesterday?  Not that I wouldn't prefer to have been born yesterday, I'd still have puberty to look forward to.

If I'd really won such a prize like this, wouldn't an actual person be handling the call, not a programmed voice? I'll bet there's an ocean of hidden charges!
"There is no ocean of hidden charges. But there are exotic ports of call like the U.S. Virgin Islands, St. Kitts, St. Martins, Barbados, and more, many featuring nude beaches, favorite playgrounds of supermodels from around the world.
That's when I always slam the phone down in disgust.

A couple of weeks ago I ran into my friend Farbman at the bank.  He looked tanned and rested.

“I just got back from an all-expenses paid Caribbean cruise!"

"Sure, got the call last month.  Fantastic food, great islands, met the Yankees. That Neil deGrasse Tyson is such a card!"

"It's made to sound that way. It's paid for by a billionaire who loves trusting, positive, non-judgmental people. If you listen to the message right up to the part about supermodels, a live person comes on and signs you right up!"

"But that's the point when I cut off!"

"If you're lucky enough to get the call, Perry, hang on for dear life! Oh, those topless beaches are incredible!"

Since then I haven't received the call.  Though I pretty much don't leave the house waiting for it.

Is there such a thing as a "Please Call List?"

Unfortunately, Connie usually answers the phone at our house and always hangs up when they get to the topless and nude beaches part too. It's too bad. I bet her and Neil deGrasse Tyson would hit it off real well.

Farbman said he had a wonderful time hanging with her on the last cruise!

And she told me she was going to some boring sewing seminar in Nebraska. Imagine that.