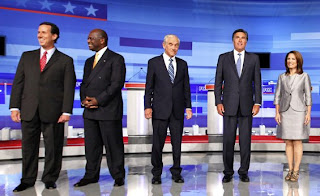 Seems nothing unites the current GOP Presidential hopefuls like their opposition to the changes implemented under the Obama Administration to that one major program which affects virtually everyone in the United States.

Each of the GOP aspirants strongly asserts that these sweeping changes were forced down the throats of the vast majority of Americans contrary to their express will and desire!

“Day One in office as President,” Governor Rick Perry of Texas pledged yesterday, “I will be working 24/7 to roll back the job-killing, anti-American, Socialist-inspired changes made to Facebook under ObamaFace!”

Widely known as ObamaFace since Barack Obama was in office when they transpired, the recent stylistic and formatting changes to Facebook have drawn the ire and indignation of the rest of the GOP field as well as that of Governor Perry.

“What’s next?” questioned former Senator Rick Santorum. “Will Obama force us to friend filmmaker Michael Moore or poke Rachel Maddow and Professor Cornell West of Princeton University every hour on the hour?

“Facebook must be returned to its original state,” urged Congresswoman Michele Bachmann, “just as God and Jesus created it some 4,000 years ago!  Until it’s returned to that state, I’m simply going to stare ahead blankly.”

“When people are frittering away their time on Facebook, they tend to order gobs and gobs  of pizza," stated Herman Cain, former Chairman and CEO of Godfather’s Pizza.  "Fewer people on Facebook means a decimated pizza industry and an America ripe for the taking by Socialism!”


“Mr. Zuckerberg, tear down these changes!”

Mark Zuckerberg, CEO and President of Facebook, is believed to be Obama’s confederate in the creation and implementation of ObamaFace.

So far, tellingly,  neither Mr. Obama or Mr. Zuckerberg have been available for comment ....