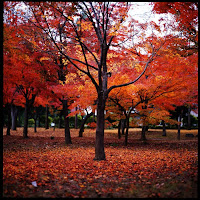 Ah, the Beauty of the Fall.  Know what?
Shut the hell up!


"April is the cruelest month," once wrote the poet, revealing himself to have been woefully ignorant of the true nature of the seasons of the year as well as of the concerns of one Perry Block, regardless of how good he might have been at personification and bowling over the ladies at parties.

No, that cruelest of all months is the one underway.  September, for me, is the Simon Cowell of the Gregorian calendar.

September marks the end of Summer. It’s the time I realize that not only did I fail to do all those outdoorsy things I hoped to during the last three months,  the one time I made it to the beach the water was 58 degrees, the top of my head got so sunburned I resembled a human flashlight, and the only attractive woman who talked to me on the beach asked if she could bury me .... that is, completely.

With September comes the Fall.  So this is your favorite time of year, huh?  To me, September marks the beginning of a season characterized by the impending death of all things green, growing,  and alive, with the one exception of the Incredible Hulk.

That nip in the air?  It spells animals scurrying for cover as if the Luftwaffe were approaching and leaves and plants beginning to sag and shrivel like your Aunt Hilda's face before she had the work done,  and meanwhile all you can talk about is where to get cider.

Those shortening days? In a couple of months, Nature will  be throwing its leafy little hands up to its dainty neck and doing a command performance of the final scene from Camille, and there you go hopping on a hayride.

September sets this all up as coolly and deliberately as a bartender at 4:00 P.M.  All while you're busy bobbing for apples.

September marks the annual return to reading, ritin', n' 'rithmetic.  Doesn't matter how long it's been since I've been in school, every September I walk about inquiring of everyone if they got their books yet, who they have for homeroom, and if that hot Nicole Halaylos is in any of their classes.

It's a compulsion I cannot control. How about you?

And worst of all, for the 41st year in a row seems I’ve gotten Miss Kretchmer in Geometry.  She's still mean, she still doesn't grade on the curve, and OMG! she just called on me in class!

And September presents the anniversary of my birth. This year I will be 61 years old on September 12th.

That's right --- my freshness seal expired deep into the last century.  I am "better if used before September 12, 1982," although few now would rightly want to use me anyway.

Nevertheless, every year the date September 12 sees fit to drop another unwanted digit on the mass of digits it has already mercilessly deposited upon me.  I am annually being rung up like a cash register by the month of September itself!

“Try to remember the kind of September,” once wrote the songwriter, revealing himself to be have been woefully ignorant of the true nature of the seasons of the year as well as of the concerns of one Perry Block, regardless of how good he might have been at rhyming three syllable words and bowling over the ladies at parties.

Try to remember the kind of September?

There’s 21 days ahead of me I’d like to forget!