Sixties’ Speak - Then and Now 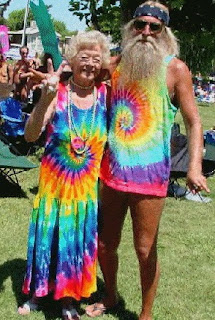 I can't exactly say that I’d like to go back and relive the era of the 60’s.

Then again, right now I’m experiencing a different era of the 60’s. Between the two I’ll take the first one --- cannabis-stained knuckles, fingers, and hands, hands-down!

It seems incredible that’s it’s been over 40 years since those days of sex, drugs, and rock ‘n roll, and for me, well, two out of three wasn’t bad.  Much has changed in our culture since then, including our language.  Many of the old phrases are still around, but the meanings aren't quite the same.

Far Out! --- Once an exclamation of excitement, wonderment, and radical possibilities.  Now for many Boomers,  a belt size.

Roach Clip --- Once a tweezers-like holder for marijuana cigarette remnants. Now the realization that your exterminator has overcharged the hell out of you.

Right On! --- Once a cry of solidarity and brotherhood. Now a shout out that your chip shot on the 11th has managed to trickle on up to the green.

Establishment --- Once the power, the Man, the established order you had to fight. Now the hot corner bistro you can’t afford.

Oh Wow! --- Once an exclamation of joy and exhilaration. Now an apt response when you open your cable bill.

No. 9 --- Once an enigmatic phrase in a  John Lennon authored recording by the Beatles. Now the second and generally one of the weaker jokes in a Letterman Top Ten List.

Power to the People! --- Once a cry for freedom, justice, and equality.  Now the option to select your electricity supplier.

Getting Off Now --- Once the pleasured sensation that a drug experience was about to begin. Now an exhausted goodbye to your co-worker as you exit the 6:15 out of Center City.

Heavy --- Once a heart-felt designation of relevance and truth. Now just about anything we Baby Boomers try to lift.


In thinking back to the Sixties, much of the language we spoke was indeed self-indulgent and pretentious.  But a lot of it was more like Yiddish; that is, able to express thoughts and feelings in a word or phrase for which there was no equivalent in English, or anywhere else.

And with all its foibles and excesses, there was no equivalent - and never will be - for the 1960’s. 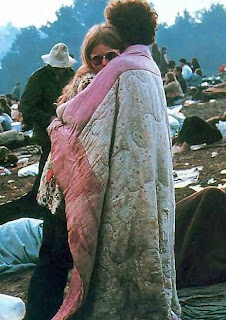 A friend of mine (who experienced all the 1960s had to offer) once said, "If you remember the Sixties, you weren't there."

Is this going to be the start of a series?

Next you could have: The 70s, The Decade That God Forgot, and then hurrah, you'd be at the 80s, my favourite decade!

Then dwindle into the 90s and so forth...

As I've said before, all I remember is one minute I was watching "Zorro" and the next minute Robert Reed was marrying Forence Henderson.

The 80's is your favorite decade? Don't have much memories of that one either, the mind was already going ....

I like this post. I won't say the only thing I know about the 60s. I do remember much of those references though.

Just as long as the only thing you know doesn't involve something I did ...

Is that you wearing the eiderdown in the photo, Perry?

Yes, Lexi, that is me. And you are now my favorite British author!

This is frighteningly accurate... LOL!

Nah, shanked it! I'm in the rough!