And How Do You Take Your God? 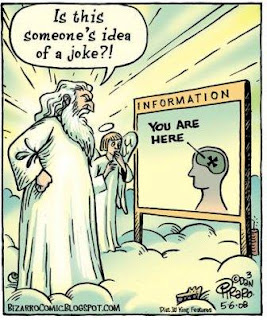 One of the blessings of being a liberal Jew is that you can take your God any way you like him.

And although your particular conception of Yahweh may color how you live your life and what customs and practices are important to you, it doesn’t change the feelings most of us have about being Jewish or a part of the Jewish people.

Only a disappointing movie from Woody Allen can do that.

How do I take my God?

I have personally never subscribed to the view that God is an old man in flowing robes with a long white beard who lives on a mountain.  Jews don’t go to the mountains, especially in Pennsylvania!   God would have a nice condominium down the shore.

But what does the entity paying the condo fees look like? And is he always good for it?

In depicting God, many liberal Jews slightly alter the language of certain prayers so as to not imply that God is male. For example:

The balance of the blessing after the opening is chanted in the traditional manner because  the gender of who's running the universe doesn't really matter, it’s either a good vintage or it isn’t.

Unfortunately injecting gender neutrality into "the Almighty Mix" only makes me think of gender all the more. This raises a number of vexing and profound questions of Biblical scholarship and interpretation such as:

• "So how’s the old broad holding up after all these years anyway?"

• "What if I pray to God and she doesn’t get back to me? I thought we had something!"

Perhaps most importantly, Liberal Judaism allows us to more readily grapple with the central question about the nature of God, Blessed be He or She. Why the heck is God so often depicted as an unvarnished and unmitigated louse whose most favorite hobby is smiting?

The Holy Scriptures says he took out Onan for doing what you and I have all our lives more or less raised to high art.

Don’t give me that innocent look!  God has pictures, if not video.

He destroyed Sodom and Gomorrah with fire and brimstone because a handful of residents were short sheeting beds, and he didn’t even explain what brimstone is or whether he got a good deal on it. Similarly he flooded all of earth but first instructed Noah to build a massive ark, well aware that Jews aren’t handy.

I take it all with a grain of salt, whether you believe the salt came from Lot’s wife or the good folks at Morton's.

Perhaps God’s not bad or ill-tempered, he just doesn’t view it as a full-time job. Or it might be that humans were simply projecting onto Hashem what they themselves were itching to do were they themselves to get promoted to the big job in the sky! Maybe God doesn't need anger management after all.  Just a better press agent.

Ultimately the question we all face is:

Do our teachings, customs, and guilt all come from one transcendent being who is everywhere and anywhere at once (and boy are his arms tired!),  or do they come from the wisdom and traditions of a people who have throughout history been perpetually playing the dual roles of both people and transcendent being, sort of like Jack Lemmon and Tony Curtis in Some Like it Hot?

So how do you take your God?

Some palpable? Loads o’palpable? Or no palp at all?  It’s all up to you.

And I believe that’s the way he or she would want it.

Hashem - Hebrew word used to denote God.
Onan - if you don't know this one, look it up, dude!  You'll relate.

Email ThisBlogThis!Share to TwitterShare to FacebookShare to Pinterest
Labels: Biblical humor, fire and brimstone, How are things in old Gomorrah, Jack Lemmon, Jewish humor, Liberal Judaism, Not a Member of the Tribe, Onan, orange juice, Sodom, Some Like it Hot, Tony Curtis, Woody Allen

God is definitely male. As a female, I am quite sure about this, and wish He'd put just a little bit more thought into our design.

I favour the idea of God the Craftsman. Sitting there thinking, "I know I've already done 400,000 different sorts of beetle, but hey, I've got a really neat idea for a new one..."

This had me laughing. I could even be a good liberal Jew (all other ancestral things being in order) with this set of idealogy. Enjoyed your perspective very much, thanks!

Lexi,
Whether God is male or female, he did a heckuva fine job with your design! (I mean genderally-speaking, though I'm quite sure your personal design is off the charts as well.)

As for additions and corrections to beetles, let him knock himself out! But with spiders, if he ain't taking 'em in a little, he better not be doing nothing!

Madison,
Glad you're laughing, thank you!

But God, please believe me: We're laughing with you, not at you!