A Short Primer on Poking 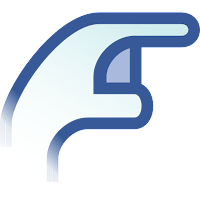 If you’re on Facebook, and statistics indicate both that you are and that you have repeatedly and emphatically refused to friend me, you’ve come into contact with that curious Facebook feature known as poking. As with climate change, the deficit, and comedian Bob Saget, few comprehend exactly what poking is or why it exists.

As a social media expert who once actually found what he was looking for on Bing, I am pleased to explain to you the true nature of poking provided you don’t turn around and explain it to anyone else without seeing I get royalties.

Poking begins with a little icon labeled “Poke” in the upper right corner of the home page of each of your Facebook friends. See it now? It’s the one with the pointing and projecting finger that looks like it might have been sourced straight out of a medical school textbook entitled Adventures in Proctology.

He or she is swiftly notified that because you have absolutely nothing whatsoever constructive to do with this most precious and wholly wasted upon you gift of life, you poked him or her.  Poking is Facebook’s way of saying “I care enough about you to execute one purposeless downward stroke of the index finger but not nearly enough to cough up the eight individual finger strokes necessary to type “ya good?”

If the pokee does not return the poke within the time it takes for newly planted wheat to ripen at full height and be harvested, then it is safe to assume he or she finds you about as appealing as the latest Kevin James movie.  Most likely you were only friended in the first place to bolster the pokee’s numerical complement of friends so he or she’d look less like a loser to the cool friends the pokee hopes to impress.

But if the pokee does return the poke, a merry romp of poke/counterpoke oft ensues, terminating only when you finally have to get off the computer to go harvest the damn ripened at full height wheat since you were too busy poking people like an idiot on Facebook to hire anybody decent to harvest it for you in the first place!

Is poking sexual in nature?

I don’t know but poking sounds dirty, which is good enough for me. It must be significant that I have never poked a man, nor has a man ever poked me. It’s not that I’m against same sex poking, I just think it should be left to the states.

I want to make it very clear, however, that when I do poke a woman I derive absolutely no sexual pleasure or satisfaction from the poking whatsoever after my initial orgasm.

Of course, if she then pokes back, there begins a continuous and rhythmic back and forth interplay of poke and counterpoke with fore finger icons thrusting and counter-thrusting, mice twisting and swaying, and lap tops lustily lapping at such a ferocious and frenzied intensity that for months thereafter I worry that I will any day receive a message sent via a heretofore undetected Facebook icon labeled:

That be 'bout all I know about poking.

Why not practice your new found expertise right now by dropping anything remotely worthwhile you may be doing and poking yours truly?

I may be Facebook Friend Filler, but I always poke back!

I knew you had it in you to blog about this. No pokes happen by accident, and to harvest poking experience into a blog topic means you have Arrived.

I don't know where you are, but I'm here, too, so we have both Arrived and can now mutually admire each other's vast wonderfulness.

Thank you, kd. I'm so glad you have Arrived.

However, not only have I not Arrived, I haven't even left yet.

Keep up the wonderfulness!

Uh-oh, now you have me wondering what's going on with all my female friends who won't stop poking me ... : ). Love your blog - funniest thing I've found online in a while!

As for your female friends who won't stop poking you, I'm not sure what they are intending but I'm very turned on.

This was awesomely funny! And so it is with said poking on FB... that Adventures in Proctology happen! LOLOL!

Sent you a friend request darlin!

Hope to chat & know you better.

I was glad to be able to provide this educational experience to the many Facebook users who may be confused about the poke feature.

(It is billable to insurance as a proctological exam, isn't it?)

My brother told me that he always wants to poke twice until after first poke. I think it's that exhillarating finger foreplay leading up to the actually poke that creates the most excitement, at least for him.