To Sing or Not to Sing

It has always bothered me that I cannot sing.

Carry a tune? I can’t even lift one.

My semester-by-semester  grades in Vocal Music on my junior high report card read like the provocative bra size of a woman whom if I ever met I would most certainly propose to on the spot!

My musical disability, however, has never prevented me from singing.  I sing in the shower, in the car, and occasionally just while walking down the street.

Since I sound something like the late actor John Wayne performing scat selections from the Ella Fitzgerald Songbooks, sometimes when I’m traipsing through Philadelphia warbling Stairway to Heaven, people hustle their children across the street as though I were a drooling degenerate instead of merely a menace to the membranes of the inner ear.

Sadly my musical infirmity has been passed on to my 16 year old son Brandon, whose vocal stylings sound as if they were specially arranged just for him by John McLaughlin of The McLaughlin Group.   Sometimes even I want to tell him to shut the hell up!

But I know how it is; music is in our very souls!

Too bad it isn’t in our diaphragms.

Recently Brandon and I both took in the hottest show on Broadway, The Book of Mormon. Watching the show, I envisioned myself singing and dancing with the cast and earning a thunderous standing ovation as admiring audience members turned their smiling and winking faces towards one another as if to say

Brandon probably had a similar fantasy,  except it most likely also entailed 16-year-old female members of the audience hurling undergarments at him.  In my fantasy, women in my peer group were heaving intimate objects as well --- in this instance, dentures.

Exiting the show, the two of us couldn’t help but perform a duet of the show's signature song.

"I believe ...." I belted out with the same melodious vocal quality I produce after eating clams at Moe's House of Five Day Old Seafood.

"....  that one day I'll have my own planet!" chimed in Brandon, performing in a manner that would inspire many to want to blast him off to that planet far sooner than he'd intended.

A group of school children wept.

It was apparent Brandon and I were costing musical theater countless fans with every mega off-key note we sang.
“Bran," I said, “Maybe we ought to cut the singing. People are staring at us and not  for the purpose of lining up the affectionate tossing of undergarments!"

"Why, Dad? We're on Broadway in the coolest city in the world.  It's fun!"

Brandon, of course, was right.  He usually is.

I jumped back into I Believe from The Book of Mormon and scatted it as only the late Duke could!

For all The Big Apple to enjoy. 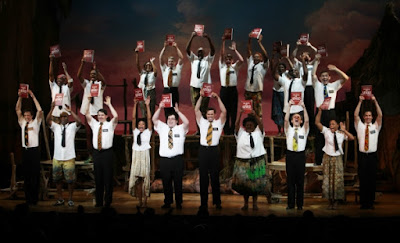 Nice of you to reply.

If I knew who you were, I would sing for you!