*Note 1:  Although it has since changed, at the time she starred in NapkinDad! Gabryyl was was using on her Twittersite  an avatar of a beautiful woman's eye, and it is upon this avatar which her character is premised. Cool with that, folks?

It all began as a shameless Twitter ploy to attract followers to my blog … and probably should have ended that way! A while back I issued a tweet offering to mention the next follower of this blog, “Nouveau Old, Formerly Cute,” in an upcoming blog post. Miraculously, not just one --- but four --- wonderful tweeters took me up on it.

Realizing I now had the cast for a major Hollywood motion picture, I decided to star them in a more grand scale production. So, after months of hard work, retakes, budget woes, and dealing with those ever-present Hollywood egos, I am proud to present to you the four great tweeters shown above starring in the new James Bond Thriller, NapkinDad!

Even if this all turns out to suck, you ought to follow them!

Office of M, Head of the British Secret Service.

Bond: Because I always blank on my first name, damn it! But I’m in therapy, it’ll work out.

M: Well, we have reason to believe your Mr.NapkinDad is secretly attempting to acquire the entire world’s supply of napkins!

Bond: For what purpose? To throw a dinner party for the cast of Glee? To construct a bib for New Jersey Governor Chris Christie?

M: We don't yet know. We only know one thing: He loves only napkins!

(Okay, so it's really the theme to "Goldfinger." Extrapolate!  It's the best we can do.)

M: Find out what he’s up to and stop him, 007! I fear for the lower lips and chins of every man, woman, and child in the free world. By the way, I’m assigning you a partner on this case.

M: No, you’re going to be working with a new agent, a young woman named Kristenry.

Bond: Does she carry a license to kill?

M: No. But she does have a license to do The Three Stooges eye poke.

Bond: Just as effective. You know, M, I’ve always wondered: Why don’t you have any other letters in your name?

Bond: His name was M?

M: No, it was Murray. Thought M a bit more rakish than Murray Plotstein! Now get to work and no mildly sexual innuendo-filled playful banter with Miss SarahGale Penny on the way out!

Kristenry: It’s really an honor to work with you, 007.

Bond: I imagine it would be. Just stick close to me, Kristenry, and do what I do.

Bond opens the door, stumbles over the entrance, trips into the building lobby nearly knocking over a tropical fish tank, and falls squat on the floor.

Bond: (rising) Well, not everything I do!

Gabryyl comes forward through the lobby, walking up to Bond and Kristenry.

Gabryyl: Why do you say your name that way, Mr. Frumpkin?

Bond: Because I always blank on my first name, damn it! But I’m in therapy, it’ll work out.

Bond: My associate, Ms. Kristenry, and I have an offer to make Mr. NapkinDad. We believe he will find it as appealing as Kleenex Double Ply Paper Napkins in the all-new decorative Cinnamon Spice dispenser!

Gabryyl: Then come right this way!

Bond: May I say, Ms. Gabryyl, you have the most beautiful eye I’ve ever seen! And, you have two of them! That’s a good number for eyes.

The three enter the office of NapkinDad, who gets up from his desk when they enter.

NapkinDad: Thank you, Ms. Gabryyl. Whom do we have here?

Bond: I’m Al Frumpkin, Mr. NapkinDad. This is Ms. Kristenry. I’ll come to the point: I have access to a rare shipment of never used cocktail napkins from the May 14, 1995 Bar Mitzvah of Jeffrey Herzberg at Temple Boray Perry Hagulfen in White Plains, NY. Interested?

NapkinDad : Oh my word, yes! They’re gilt-edged with artist renderings of Jeffrey sweating profusely in an ill-fitting suit in front of the Torah. Priceless!

Bond: As was Jeffrey’s Saturday night affair with 12 piece band, carving stations, and whiskey sour fountain! You are indeed an expert, Mr. NapkinDad!

Bond: Fine, but first I have to make sure your money’s green. Or at least a light turquoise with lavendar background and mauve highlights.

NapkinDad: Ms. Gabryyl will take you to dinner and discuss all the particulars you will need to know. Meanwhile, I’ll give Ms. Kristenry a tour of my World of Napkins History Exhibit. Did you know, Ms. Kistenry, that Leonardo Da Vinci invented the floral design napkin?

Bond and Gabryyl are at dinner in a posh restaurant later that day.

Gabryyl: So, Mr. Frumpkin: have you always been an eye man?

Bond: Yes, Gabryyl. To me, there’s nothing in the world like a woman in a burka.

Gabryyl: And how do you find my eyes?

Bond: I just look slightly above your nose and there they are!

Gabryyl: You are an intriguing man, Mr. Frumpkin! Did I perhaps ever meet you on Twitter?

Gabryyl: You recognized me! Yes, I tried a Twitter take-over! Say that fast five times!

Bond: You sent out tweets urging the Twitterverse to rise up against @aplusk! Bad business, that!

Gabryyl: Yes, and it would have worked too --- if only @AndersonCooper and @ShitMyDadSays hadn’t throw their support behind @aplusk! But I’m a changed woman, Mr. Frumpkin, now that I work for Mr. NapkinDad!

Bond: You admire him greatly?

Gabryyl: Oh yes. As totally obsessive egomaniacs go, he’s the best. He wants to create a bridge of napkins from coast to coast to show how all the world is linked by linen! Isn’t that stirring?

Gabryyl: Oh, I see a bit of egg noodle on your cheek, Mr. Frumpkin. Let me get it with this bodacious yet charming beige and burgundy restaurant napkin.

As Gabryyl wipes Bond’s face, he instantly falls forward, his head splashing into his soup. The napkin is drugged!

Gabryyl (to Bond, with remorse) I’m sorry, James; It has to be this way. (to the waiter) Excuse me, waiter, there’s a British agent in my soup!

The waiter helps Gabryyl lift Bond and they both begin carrying him out of the restaurant.

Bond: (coming to) Hello. You’re either NapkinDad or the biggest matzo ball I’ve ever seen!

NapkinDad: Laugh now, Mr. Bond! Since you won’t leave here alive, would you like me to tell you about my evil value proposition?

Bond: Why not? Slow day otherwise.

NapkinDad: It’s true I seek to acquire every last napkin in the world. Linen, paper, sanitary…. You name it!

NapkinDad: Many ways --- by purchase, theft, by always asking for a lot more napkins than we actually need whenever we’re at Olive Garden….

Gabryyl: Once we’ve got all of the world’s napkins, James, whenever anyone anywhere in the world sits down to a meal, they’ll have nothing to place in their laps. Unless they should get lucky with their dates!

NapkinDad: We live, Mr. Bond, in a world filled with mustard, ketchup, barbecue sauce, chocolate pudding, and my own personal favorite, zesty ranch dressing with bacon bits and locks of Justin Bieber’s hair!

NapkinDad: And even on clothing worn by women too!

Bond: But how does that help you? Are you going to go door to door slurping ranch dressing stains off of people’s cargo shorts?

Gabryyl: It helps us by strengthening our special partners in our plan for world domination!

Gabryll:  James!  You mean,  you didn’t know all dry cleaners throughout the world are evil?

NapkinDad: You know how sometimes they put a stain in your clothing that wasn’t there to begin with and then deny it to your face? I MADE THAT ONE UP MYSELF!! Ah hah hah hah hah!!!

Gabryyl: Dry cleaners everywhere will jack up their prices even higher --- if that’s possible --- and a desperately stained populace will pay the tow!

Bond: And you will use your share of the evil profits to finance mayhem and insurrection throughout the world! But how did you know who I was?

Kristenry: No, 007. They knew who you were because I told them! Because I am not Kristenry at all, but a master of disguise --- one who wears many hats.

Blofeld: The one and only, Mr. Bond! To ensure success of our dastardly plan, I infiltrated the Secret Service pretending to be a tweeter from West Chester PA. Lovely place by the way … and we get to root for the Phillies!

Bond: I’m not sure whether to feel silly or sad about the whole thing!

Bond: In that case, Blofeld, I’d like to be ready for pick-up by Thursday, if possible.

Bond lunges forward and with moves that make Jackie Chan look like the kid who was picked last in gym class --- y'know, like you and me --- he disarms Blofeld of his uncompleted laundry ticket, knocks both Blofeld and NapkinDad unconscious, and wrestles Gabryyl to the ground.

Bond: I’m sorry too, Gabryyl. Think maybe I’ll be a uvula man from now on. (to Miss SarahGale Penny) And how did you come to be here, SarahGale Penny?

SarahGale Penny: You and I didn’t have the opportunity to engage in our usual mildly sexual innuendo-filled playful banter back in the office, James. Thought we’d catch up with it now.

Bond: What do you  say we deliver this would-be Triumverate of Evil to M, SarahGale Penny, and enjoy your bottle of Cabernet together?

SarahGale Penny: Wonderful, James! But what if we should spill any of it? Wherever would we get any …

Voice of Shirley Bassey: NapkinDad! He’s the man, the man with the Marcal touch ….…


But James Bond will be back in …. 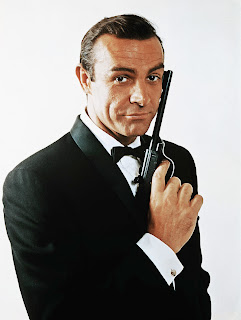