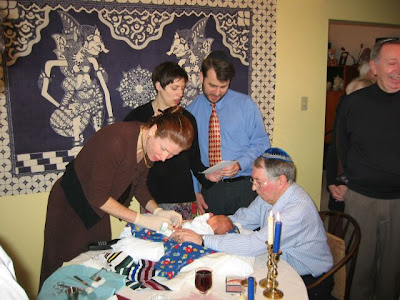 No, not this kind of Cut-Off!

I never question the authority of the Cut-Off.


The Cut-Off, so-called, exists to tell us that we’re growing old in ways we never dreamed of or imagined. And when you get to be my age, Cut-Offs of all kinds come flying at you like bodies in a Quentin Tarantino movie.

My 15 year old son Brandon and I were one day in Borders, perusing with no particular purpose, when I picked up a couple of books and plunked my 60 year old butt down on the floor.


“Someone your age cannot sit on the floor! People will think you’re having a heart attack! Isn’t Borders in enough trouble!?"

I simply hadn't realized it.

I’d reached the point in life where placing my can upon the carpeting acts to rip a hole in the space-time continuum!  Invisible but nonetheless fully existent sulfur spewing demons from a parallel dimension were no doubt dispersing themselves throughout Borders, checking out historical romances and ordering lattes from the Cafe.

I arose. As I said, I'm not one to challenge the authority of the Cut-Off!


Some Cut-Offs are obvious. I would never, for example, think of wearing a baseball cap backwards. Whenever a guy even many years my junior attempts to sport a backwards baseball cap, he looks like he’s not sure what direction he’s going in.

Show me a 60 year old guy with a baseball cap on backwards, and I’ll show you a guy who may well attempt to get places the rest of his life by backing up.

There are many Cut-Offs in the world of growing older, virtually all of which I am on the wrong side of.   Here's a brief but admittedly woefully incomplete guide to just a few of them:

Calling a male friend altogether. Cut-Off: whatever age you first have children.

Using the word “splendid.” Cut-Off: None.  And it’s a splendid word to use to replace “awesome” when you’re past the Cut-Off for "awesome."

Wearing Painter’s Pants. Cut-Off: 27, unless you happen to actually paint houses for a living.

Stacking the cream containers on the table at the diner to see how high you can get them to go until they fall over. Cut-Off: 19. Sure you can do it when you’re older. But what’s cute and funny when you’re a teenager is liable to nervously empty each and every table adjacent to yours when you're 62!

Going on an amusement park ride called the “The Exterminator Terminator Wowie IV!” Cut-Off: Cannot ever be soon enough!

Brandon and I were one day watching a rerun of That 70's Show when I happened to say to him: “Brandon, you know which of the two young women on the show, Donna or Jackie, I find most visually appealing?” I admit that when I posed the inquiry, “most visually appealing " was not actually the precise verbiage I employed.

Brandon turned a color that can only be described as not existing in nature, and at once I realized I had out-Hefnered Hefner, out-Humbert Humberted Humbert Humbert, and gone all the way to out-little old guying the little old guy who married Anna Nicole Smith!

“Brandon," I sighed, "what is the Cut-Off for admiring young girls?” In this instance, having been chastened, I did indeed utilize the verb “admiring.”

“Just so I know for the future," I asked wearily, "who is it okay for me to think hot?"

“Betty White,” said Brandon. “Because there is no Cut-Off!”

Betty White is great, no doubt about it.

But this was the most unkindest Cut-Off of all.

This had me laughing out loud. Wonderful post! My first time here... but I'll be back. =)

No one has ever looked good in a baseball cap. Ever!

And you do know all teenagers are terribly censorious and conservative, and it is your duty as a parent to embarrass Brandon from time to time? Else he'll grow up all wrong.

India,
Thank you very much! Please let me know whe you'll be back. If I know you're coming, I'll bake you a cake!
But: again, what did you mean by "I’m having trouble getting started with anything productive, so you get funny stuff???"
It's okay. Just as long as you keep the fast action and smutty sex coming!

Napkin Dad,
Enjoying your artistic napkins as well!
Please check these out, folks (all three of you, whatever!) You've never seen anything like them, I promise.
Thanks again, NapkinDad!

Lexi,
Thanks! Two things:
1) I'm sure you are well below the Cut-Off for using the word "dude," so no problem. And the Cut-Off for a woman is at least as low as that for a man.
2)You are one awesome babe! (Even if I violated any Cut-Offs, know what? It's the truth, man!)

Great post, Perry! And for what it's worth... Donna. Definitely Donna.

Anna,
Yep. That's where I was headed too.
And thanks for not calling me on the Cut-Off!

I sincerely think Jeff Bridges has blown 99% of the cut-offs mentioned above, especially the one about calling another man "dude," "man" and use of the word "awesome."

But you've gotta love him for it!

I agree that Jeff Bridges has nonchalantly and effortlessly blown away every single Cut-Off I've ever written about, including the one about wearing a suede cowboy hat and calling women way younger than him "darlin'."

Unfortunately I take much more after his brother Beau, who isn't allowed to do stuff many 80 year olds do.

But thanks for the nice letter, J.S., and for following the blog!