My Editor, My Son 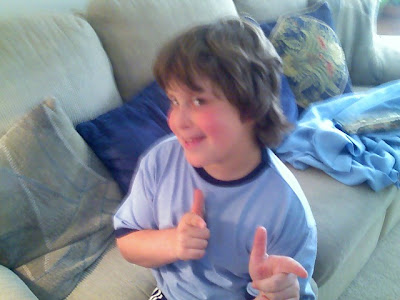 A Portrait of the Editor as a (Much) Young (er) Man
They say every good writer needs an editor. I don’t know if that’s also true for the bad and indifferent ones but --- whichever kind of writer I am --- an editor surely I’ve got.

And he’s 15 years old and I used to diaper him!This wouldn’t bother me if Brandon Block would approach my humor writing with a deft and gentle red pen. But he rips into my work like Ben Bradlee editing the latest tell-all book by Kitty Kelley!

“Dad, lose that entire concept!” snapped Brandon last week, peering over my shoulder at the locked-up Microsoft Word document pulsating on my PC screen. “It sucks!”

“Why, Brandon?” I asked. “The Lone Ranger needs a new companion and instead of a native American, he hires a Jewish man. Funny!”

“But, Brandon, instead of shouting a hearty ‘Hi - Yo, Silver!’ he shouts a hearty ‘Hymen Silvers!’ Funny!”


“Because nobody knows who the Lone Ranger is! That character hasn’t been on TV in my lifetime!”


Well, like I said: All writers need an editor and I’m fortunate to have one with his finger well positioned on the cultural pulse. But my own personal Perry White is also driving me mesuganah!

My professional relationship with my hard-boiled editor began when Brandon started to show an interest in the humor writing I’d done on and off for over 20 years and in earnest for the last year. Normally secretive, I usually don’t share my work-in-process with anyone short of receipt of a Congressional subpoena.

But Brandon thought it was cool that his dad was writing funny, so I began showing my nascent humor pieces to him.

And he’s been slicing, dicing, and frying them up in a pan ever since!
"Frankly, Dad, this piece wouldn’t be funny to anyone if you were tickling them!"
“Dad, this reference to the woman you dated as 'Ernest Borgnine with lipstick' is your third ‘Ernest Borgnine’ reference in the last month! Try 'Jonah Hill in high heels.' More current, more funny!"
"What are you trying to write here, Dad, the operator’s manual for your new toaster?”
It isn’t that Brandon means to be harsh or insulting. He realizes it’s tough out there in The World of Trying to Get Stuff Published, and he just wants me to put my best foot forward.


I told him in that case I was going to need a third foot.
He told me that line wasn’t funny!
This afternoon,  Brandon and I were reviewing my latest piece on the History of Life on Earth, which posits that very little true progress has taken place in the span of time between the emergence of the first uni-cellular creature far beneath the primordial seas and the granting of a late night talk show to Carson Daly.
"Dad," said Brandon wearily, "that comma should be a semi-colon, you've used the phrase "lame butt" three times in one paragraph .... and Carson Daly?


"That's a totally wrong name.  You might think he's a yutz, but a lot of people like him. Now here's the right spot for Ernest Borgnine!"


I could take it no longer.


“Sure, Dad. I liked Joel Stein’s last piece in Time very much.”

It's nice to have an editor who cares. Or do you pay him?

You could start a new blog "S#*t My Son Says" and turn it into a TV series starring Screech and one of the Jonas Brothers.

I see you going places, Perry.

Yes, but it's awfully hot in the place I think I'm going!

However much it might hurt, sometimes it really is a case of.....outof the mouths of babes etc.

You're right, Barbara. Thank goodness I've got him on the payroll!

Oh... did I laugh while reading this post! Wonderful. Personally, I think you're incredibly lucky to have your very own editor. My household consists of my husband and me (a few cats and a dog), but I am the only one who reads anything I write... my husband has never been in the least bit interested in books so it would be fabulous to have someone on hand to kick me into touch every now and again. Oh and teens... don't you know, they know EVERYTHING! lol

Brandon sounds like he's really trying to help out his old man with the writing career, so heed his advice.

And it's good that you don't diaper him anymore, now that he's fifteen.

Joel Stein? You mean the guy who comments on that I Love the '80s program? Bah.

Well my son the doctor and Harvard graduate won't even read my blog although he succumbed to signing the guestbook and being a "fan" of my "gonepausal" Facebook page. He's apparently terrified of my grammatical errors i.e. the liberties I take with language and punctuation. I'm not sure he's ever read a word I wrote. I however, edited his papers in high school as they were not always perfect!
So at least your son is willing to read your stuff regardless of how unfunny he finds it. I do think that Jesse thinks I'm funny but that the extent of his interest. p.s. He'd be really happy if I made some money writing.

Well, maybe I can loan Brandon out to you now and then if you like. But I warn you --- top notch editors like that DON'T COME CHEAP!

Oh, what's that, Bran? "Top notch editors ARE NOT INEXPENSIVE?"

Brandon is a great kid, even though I've asked him if he will revert to the age he is in the picture above, and he steadfastly refuses. And I offered him a shiny quarter yet!

I don't know about the "80's Program" but I don't find Joel Stein all that compelling. So why does Brandon prefer him to me?

Wait a minute! Your son? A Harvard educated doctor!

I had no idea!

But what I do know is: I love you! I want to spend your son's money with ..... I mean, spend my life with you! I am coming to Chicago to drink from the trough... I mean, pledge my troth!

I'd be happy if you made some money writing too, but that would be gravy, and me, I'm ready for the gravy train in chief!

Umm, please tell me he's not just a skin doctor.

I'm telling ya, you and your son would make a dynamic writing team. :) This was a hilarious post, Perry. You definitely have the gift! :)