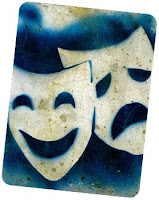 An Original One Act Play

Act I, Scene I

A business office. Cynthia is sitting up front in outer reception area. Perry, dressed in a business suit, enters, smiles, and walks up to her.

Cynthia: Hello, you must be new in the building. The air conditioning unit has been ....

Perry: (a bit taken aback by this) Oh, no, I’m not here to fix the air conditioning unit.  In fact, I’m so not handy I probably would dress something like this to fix an air conditioner!  I’m Perry Block and I’m here to see Mr. Burton about the advertised position.

Cynthia: (somewhat surprised) Oh, well, then! You must need to lie down …. I mean, would you like to sit down? My name is Cynthia. There’s magazines here …. We have Reader’s Digest, GeezerWorld, and Alte Cockers on Parade. Oh, would you like to see this month’s issue of PolyesterDude? Great article on beating constipation!

Perry: Thanks, Cynthia, but I’ll just pick one out myself.

She nods to him. He selects Rolling Stone and sits down; she is dumbfounded.

Cynthia: Sir, I think you made a mistake; that magazine is about rock and roll, not geology.

Perry: Oh, no mistake. I’ve been reading Rolling Stone since the late 60’s. (trying to relate) Funny story, in the early 70’s a group called Dr. Hook and the Medicine Show did kind of a goof song called “The Cover of the Rolling Stone” which actually landed them on the cover ....

Cynthia: (trying to be nice but clearly not fascinated)   I'll ask my Granny about that. She knows about all those old-fashioned music groups like the ... um ... Beat-offs, I think their name was.  (changing subject) I’ve got a call to make now. (lifts receiver) If you need anything, just holler! I mean, just make a very loud gurgling sound and I’ll hear you well enough before you start choking!

Perry sits down and begins leafing through the magazine.

In blows a much younger guy. Looks confident but a bit sleazy and overly casual in his manner. He glares at Perry as if to say “riff raff” and swaggers up to Cynthia as she puts down the phone. She looks kind of impressed.  (Chicks!)

Vance: Mr. Vance Stud-Young. Of the Omaha Stud-Youngs. Here to see Mr. Fred Burton at 9:00 A.M. (to himself, but so Cynthia can hear) Huh, for once I’m actually on time!

Cynthia: (brightly) Yes, Mr. Stud-Young! We’ve been expecting you! There’s just one gentleman in front of you who’s No. 1, but (she cups her hand to whisper to him) I don’t think he’ll take very long.

Vance plunks himself down next to Perry.

Vance: Hey, dude, you here collectin' for liver spots research? I don’t think they ‘preciate you pawing their magazines.

Vance: Like me? Ain't nobody like me! And I got the tattoos of Jesse James on my butt to prove it!

Perry: Well, I can't compete with that.   Though frankly I've never seen the need to hire an interior decorator for my tuchas....

Vance walks over to Cynthia who seeks to reassure him.

Vance: What agency sent him? --- Cadavers & Co? How did he get here? The free downtown passes for old geezers don’t operate on Wednesday.

Cynthia: I believe he drove himself. And today's Tuesday, Mr. Stud-Young.

Vance: How could a dilapidated dude like that get a license? And me yet with mine suspended for two silly DUI’s. Or was it three?

Vance: Well we’ve got to do something ….. Tell Mr. Burton I gotta be one and he gotta be two.  I didn’t have no breakfast and I need my Happy Meal with special toy for children under 3  fast or my whole day will suck!

In comes Mr. Fred Burton, an executive recruiter type. He gives a broad smile to Vance and glances at Perry, looking away so quickly it would give a normal person complexes, let alone Perry.

Vance: (to Perry) Only a number, Pop!

Burton: I’m sorry Mr. Block; you’ll have to wait a bit. In fact, why don’t you stop down in our coffee shop and get some luke-warm tea? They have decaffeinated, and y'know, they also make a mean bowl of porridge!  They can make it luke-warm as well!

Perry: (facetiously once again)  Well, that's tempting, Mr. Burton.  May I ask Cynthia to hold my teeth while I head down there?

Ignoring Perry, Burton shakes Vance’s hand enthusiastically and walks him over to the other side of the room. He talks to him warmly, gesturing upward as if to say "the sky's the limit, my retro-neanderthal friend!"  Cynthia, still seated at the desk, gives Perry a little smile and returns to her desk work.

Burton:  Frankly, young man, I like the cut of your jib!

Burton speaks excitedly, smiles broadly, and spreads his hands and arms wide apart  as if to say “this much money and even more if I were bigger and had longer arms!” Burton briefly shakes his head, but continues on excitedly.

Vance, however, does a double-take!

Vance:  (to Perry) See ya, Pop.  This place is just your speed:  Rocking Chair, First Gear!

Vance storms out muttering "got an extra hour, get me an extra Jesse." Burton and Cynthia look at each other.

Burton: (to Cynthia) Now what are we gonna do!?   I was struck dumb by Stud-Young!

Burton:  Cynthia!  How are we ever going to fill this position?

Cynthia whispers to Burton briefly and half points to Perry.   Burton regards Perry with a sort of "not if he were the last man on earth" look, which frankly is a particular look Perry has seen more than a few times in another context.  After a long pause, Burton approaches Perry.


Burton: Uhh, Mr. Block, it seems to me, umm, our No. 1 is temporarily indisposed.  May I see your resume, please?

Perry hands his resume to Burton.


Burton:  Well, it's kind of nice that the Executive Summary isn't covered with chunky peanut butter for a change.

Perry:  Frankly, I did wipe some apple jam off the Competencies.  But you'll notice I saved all my misspellings for words with one or more syllables.

Burton: But still kind of a creative idea. You have some credentials, it seems ….

Perry: (modestly, like the hell of a guy he is!) Well, you can get just about anything on the internet these days.....

Burton:  Mr. Block, we should talk. Why don’t you come into my office?

Perry: Sounds good to me.

Burton: I guess maybe you are our No. 1 today after all.

Perry and Burton vanish into the office together. Cynthia, looking pleased, goes back to her work.