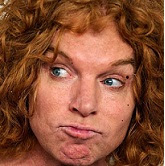 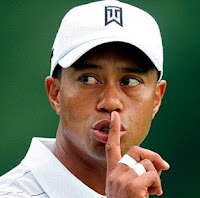 You've probably seen the commercial that's been on television of late in which NASCAR driver Brian Vickers, comedian Kevin Nealon, and professional golfer Arnold Palmer extol the virtues of a prescription drug that's helped each one of them manage certain individual health considerations.

That commercial has been so successful that a similar new commercial has just been produced.  Like the first one, it features a NASCAR driver, a comedian, and a professional golfer.

Scene opens with NASCAR driver walking on the race track.

Brian: I'm Brian Knickers, NASCAR driver.  Why am I called "Brian Knickers?" Because Perry is Jewish and  doesn't know a damn thing about NASCAR, so he just mangled my name "Brian Vickers" for this stupid parody.

Carrot Top: I'm Carrot Top, comedian.  If you can call me that.

Tiger: And I'm Tiger Woods, once successful professional golfer who has played lately as well as Grandma Walton. Know what the three of us have in common?

Brian:  We talked to our brokers about investing in Xarbelto. I had a serious cash shortage after my last divorce and I needed an investment that was going to pay off fast!

Brian:  Xarbelto has been proven to return excellent financial results because its manufacturer has a sales/marketing team of unscrupulous slime balls expert at dispensing illegal perks to corrupt doctors to induce them to prescribe Xarbelto to whomever they can, regardless of whether anything's actually wrong with them.

Carrot Top:  And I invested in Xarbelto because I'm a goofy novelty act that wore razor thin in less than one tick of the atomic clock and somehow I've gotta eat! Xarbelto has been proven to produce substantial returns for people on the fringes of show business whose lack of cash has been caused expressly by lack of talent.

Both Carrot Top and Brian join Tiger Woods at a patio table overlooking a golf course.

Tiger: Hey, I'm glad we could all get together.  Any one of you guys got any dough you can lend me?

Brian:  Cut it out, Tiger.  At least until we see what Xarbelto closes at today.

Carrot Top: You know, guys,  I tried investing in another drug called Warburton but my portfolio took  a beating.  The Warburton sales team didn't know what to do. They were providing doctors with actual medical information, not getting them laid!

Brian:  Yeah, they didn't even know how to blackmail a doctor when necessary. Hell, the day the Ashley Madison thing broke, Xarbelto stock went up 37 points!

Waitress:  You fellas want anything else?

Tiger: I'll have another Tiger Woods.

Waitress: I'm sorry, Mr. Woods, but there is no such thing,

Tiger: Who gives a shit?  Nobody else at this table has a drink named after them!

Carrot Top: Oh yeah?  I'll have a carrot juice. So fuck you, Woods!

Next comes a montage of Tiger Woods, Brian Knickers, and Carrot Top on the golf course --- teeing off, putting, and riding in their carts.

Announcer:   As with any investment, past performance does not guarantee future returns. This is especially true with Xarbelto because we're not really sure the stuff does anything. It may be a sugar pill. Some investors may experience a bleeding of cash and in some cases severe hemorrhaging of cash should the government push deeply into our practices, so make sure to vote Republican. Before starting investment in Xarbelto, tell your broker about any prior lawsuits you have filed, ethical principles you may have, and your tolerance for being fucked with.

All three are now putting on the 18th green.

Brian: You know, Xarbelto has been prescribed over 11 million times in the U.S. by doctors bought off with exotic junkets, drugs, and hot sex.

Carrot Top: And that number is growing.

Tiger: Like my score, damn it!  You guys sure you can't float me some scratch?

Announcer: Ask your broker, financial adviser, or one of these three greedy bastards about Xarbelto.

Tiger: Investing in Xarbelto was the right move for us.  Unless the stock market tanks between now and January 1, then I'm SOL!

Announcer:  If you can't afford your investment in Xarbelto, please don't contact the company. We won't even talk to you.  We barely talk to Mr. Woods anymore.

Brian (to Carrot Top): Poor guy.  He'll never get a drink named after him now!