Hail to the Tag Team! 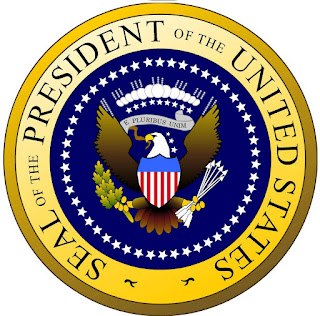 Seal of the Plural Presidents of the United States of America

We now enter into what is known in American politics as a “lame duck” session of Congress.

Perhaps never in history have those two words more appropriately defined our elected leaders: “lame” as in their general abilities for governing and “duck” as in how most of them act when it comes to discussing anything beyond the audible stench their opponent leaves when entering or exiting a room.

Our system is fatally flawed, folks, and the only good thing about that is how handsomely it showcases my talent for alliteration. Most often the kind of person who runs for political office is a charming but unctuous, none-too-bright butt-face. You know --- just like your cousin Harry, except with much better hair. The kind of person who should run for office is an intelligent, thoughtful, conscientious nerd-face. You know --- just like you and me, except also intelligent, thoughtful, and conscientious.

I hereby present my idea for improving the governance of our nation: the Plural Presidency and the Conjoined Congress of the United States!

Effective immediately every position in American Government will be filled by a tag team. America will finally get both the Quality Governing and the Artificial Surface Charm we so crave, all while simultaneously reducing the national unemployment rate by 537 additional persons!

In the new American Political System, the Front will make the speeches, attend the dinners, kiss the babies, and kiss you and/or me in the pale moonlight as applicable. The Front must be beautiful, poised, and energetic but may be every bit as dumb as a fencepost which insists on lying horizontally, or as Levi Johnston.

The Wonk will study and reflect upon the issues and tell the Front in clear non-compound sentences exactly what to say and do about them. Although the Wonk must be brilliant, perceptive, and innovative, he or she may be as photogenic as a Mel Gibson mug shot and possess charisma such as to make a Securities and Exchange Commission Filing look like a Kim Kardashian photo-shoot.

We could keep some of our same politicians. Sarah Palin would be the perfect Front for a Presidential ticket, but who the hell would ever be stupid enough to consider her for the Wonk? And virtually every unemployed actor in Hollywood would be lining up to audition as the Front for Democratic seats in Congress.  Assuming, that is, there are any left.

All right now, folks we give you the Dream Team:

Ladies and Gentleman,
Just try to take them on, Mr. Ahmadinejah!


Will tag-team government work ….. or is it the worst Idea I’ve had since I recommended Charlie Rangel be put in charge of the House Christmas Fund?

Please let me know what you think.

Or better yet, what your Wonk thinks!

I think you were desperately stuck for an article concept. I feel that pain and it sucks. I often say "Duh, what should I write about?" I got nothin' As for a tag team Presidency - nothin' there either except I would not vote for Justin Timberlake no matter if Thomas Jefferson was behind him. Not my type. Perhaps a country of atheists could make a better choice.

Yes, it was an off-week.

First, of course, there was the alien invasion. With thousands vaporized throughout the country and me holed up in Philadelphia fighting hand to hand for the future of humankind, it was kind of difficult to come up with a serviceable comedy idea.

Then, that diplomatic mission for the Pope. His Holiness so rarely calls on me that I just had to go, and the four continents in three days was very tiring, especially coming off facing the alien vaporizing ray.

Finally, your sexually harassing phone calls at all hours of the day and night made it totally impossible for me to focus. That's OK, Gail; I know how tough it is to fight it!

Thanks for feeling my pain!