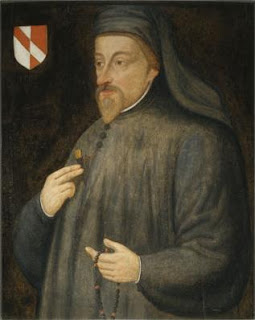 Is that goatee adorable or what?

Perhaps no other great work of fiction or art is more closely associated with the spiritual rebirth annually experienced in the month of April than the rollicking Canterbury Tales authored by the rollicking Geoffrey Chaucer.

As we enter the early days of April, it is indeed apt for us to pay homage to the great Geoffrey Chaucer (1343-1400, so don't bother ringing him up).  Chaucer was a true Renaissance Man at a time before the Renaissance had taken place and therefore had to be referred to, according to the parlance of the times, as a true Taft Administration Man.  He was by turns  a poet, author, philosopher, astronomer, diplomat, raconteur, and crackerjack fast food waitress, and no other writer of the era could come close to matching him for tips.

In Chaucer's  day, the young English language was in the throes of Evolution, although Rick Santorum doesn't believe that.  Middle English was spoken but rarely written,  making it exceedingly tough to grab a couple of best sellers for the beach.   The Canterbury Tales  and other great works of Chaucer --- not to mention the half-dozen lousy ones ---  helped to standardize and popularize the new language so that today we may all enjoy Mario Lopez.

The predominant language in Britain at the time was more like French, heavily flavored with high-handed remarks about tourists and hundreds of words synonymous with retreat. French had filtered into Britain at the time of the Norman Conquest in 1066, and ever since then Norman had made sure every menu in the country boasted rich French foods for which there were no words in English other than "bigge hunkes of meate."

To this Norman French was blended the indigenous Olde English spoken by the many tribes of pale-skinned natives with poor dental hygience of the isle itself.  This blending gradually resulted in the bold emergence of a new tongue known as Middle English which  nobody could read or write and was a bitch to get directions in. 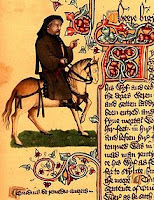 Thanks to Chaucer's immortal  poetry,  Middle English became more widely written and understood and gradually evolved into our own Modern English, although Rick Santorum doesn't believe that.

The Canterbury Tales is Chaucer's most towering achievement,  especially if you stack all the copies read by college freshmen on top of one  another.  There's something for everyone in these tales of medieval pilgrims on their way to visit the shrine of St Thomas a Becket at Canterbury including quite a bit of hard-core sex, if only we could understand it.

To share the greatness of Chaucer with you,  I've reprinted below the opening passages of the General Prologue to The Canterbury Tales in the original Middle English.  I've also fully annotated the selection for your edification and ease of reading and also because I was stuck home last weekend.

If only I knew what I was talking about, this would really be something!

First, a few words to familiarize you with some of the aspects in which Middle English differs from Modern English:

There were 87 consonants, several of which were poisonous.  A good half dozen of them eventually left the language over salary disputes, and Chaucer himself ousted the consonant flopkiss  from Middle English  when he surprised it one day sleeping with his wife.

Middle English featured all the standard vowels we know and love today (well, I'm not that fond of u, but that's me) and one additional vowel known as cropman.  Thus  the lineup of vowels was:  a, e, i, cropman, o,  u.  Why cropman was dropped from what was to become Modern English remains a mystery to this day.

What's ahead, my friends,  is prologue.  Enjoy!

When that Aprill with his shoures soote
The droghte of March hath perced to the roote,
And bathed every veyne in swich licour,
Of which vertu engendered is the flour.

"Droghte of March?"   Like it doesn't rain "shoures soote" all  year long  in England, including March?   Did Chaucer work for the Chamber of Commerce or was he dipping into the "swich licour" a bit much?

When Zephyrus eek with his sweete breeth
Inspired hath in every holt and heeth
The tendre croppes, and the younge sonne
Hath in the Ram his halfe cours yronne,

"Sweete breeth?" He can't be talking about the Zephyrus I know.  It's a wonder the"tendre croppes" weren't set on fire!

"Priketh" them, eh?  Told you this would get dirty.  I'd probably "slepen" with "open ye" too, whoever she is,  if I weren't worried about Nature trying to climb up into my "corages!"

Pilgrimages were so popular that "longen folk" (and "shorten folk" too!) and even professional golfers ("palmeres")  all lined up for them.   Unfortunately from what I've heard, they were more "unkouthe" than "kouthe" in "sondry londes," especially after tapping that "swich licour!"

"Wending," especially fantasy wending,  was even bigger than golf.

The holy blisful martyr to to seke
That them hath holpen when they were seeke.

All of the pilgrims in The Canterbury Tales  were traveling to Canterbury to worship and thank St. Thomas a Becket for curing them when they previously had been sick.  There you go, folks:  the first recorded instance of an effective, workable single-payer health care system in the world!

Have to love an erudite blog post, especially one that's also humorous. Nice work! As a once-and-forever English major, I heartily approve.

In the meantime, please take care to stay away from those poisonous consonants!

The horse bit made me laugh aloud and alone at my keyboard.

What Chaucer really needed was a proofreader. I expect they hadn't been invented back then.

I think proofreaders did exist back in Chaucer's time, but most of them couldn't figure out Middle English any better than we can.

Whatever did happen to cropman anyway?

Would the swich licour in the veins lead the veru with the flour to make a rum cake? I'm suspicious that swich licour is 'pot liquor'; yummy, but not as much fun.

You truly have the feel for Middle English, Judy.

If we can just keep you away from the swich licour, maybe you can explain to us what it all means!