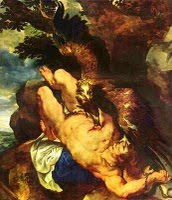 It’s been one tough 2,000 years for the Jewish people!

Sure, we’re still here and this year celebrating six centuries of dominating the media, but it hasn’t been an easy ride. For most of that time, we’ve been surrounded by a whole lot of folks who’ve found us about as appealing as a Ben Affleck film festival.

What if Fate had taken us all down a different path?

“Governor Palin,” asked Bill O'Reilly during a recent Fox News interview, “may I ask your position on school prayer?”

“Bill, my position on school prayer is unwavering,” said Palin. "I believe firmly that Zeus should never have been expelled from the classroom!”

Oh brother, I thought, here it comes! I well remember those days of forced school prayer in the 50’s: “Our Father, who art on Olympus ….”

“I have always been guided in all things,” Palin went on,” by the teachings of Zeus and his one true son, Hercules!”

Yep! The old “give us this day our daily bread and circuses ….”

“As far as I’m concerned,” Palin snapped,” the problem of global warming is limited to one person and one person only --- Icarus! I’m sorry he fell into the ocean but he shouldn’t have been flying above the ozone layer.”

I’d had enough! Why do some people act as if this were a strictly Greco-Roman nation?

I decided to take a drive into Center City. It was holiday time, and I figured there’d be lots of cool things to do.

Sure enough, when I got downtown, everywhere the city was aglow with joyous signs of the annual Winter Festival of Charybdis, Spirit of the Ocean Whirlpool. Carolers sang on every corner.

“It’s beginning to look a lot like Charybdis,” sang a group of schoolchildren, looking very much like something out of a print by Currier and Ives.

“Good King Menelaus looked out on the Feast of Helen,” warbled another merry group.

This was all very lovely, but a little later as I walked down South Street, I was suddenly surrounded by a gang of ethereal-looking young people imploring me to accept leaflets they were handing out.

“Prometheus freaks!” I muttered to myself in disgust. They’re always after the Jews!

I managed a quick polite “no, thank you,” and continued on my way.

“Don’t walk away, sir!” a young woman called out. “Prometheus sacrificed and suffered to give mankind a wonderful gift.”

I didn’t mean to be rude, but I’ve about had it with how the Jews are headed for Hades if they don’t climb aboard the train that’s “Prometheus Bound.” So what if back in the day he did weasel some fire out of gods for us? What’ll they claim he’s going to give us next --- eternal life?

“How did you know they were Prometheus freaks?” asked a man standing a few feet away from me.

“Most of them wear little necklaces with a pendant shaped like a half-eaten piece of liver. It’s so morbid!”

On the way home, I wondered if one day we could all just live and let live. After all, my friend Blitstein has a successful mixed marriage. He’s Jewish, she’s Dionysian. I enjoy going to their house; her family throws great parties!

Frankly I have to admit I do love secular Charybdis. I watch the Alastair Sim version of A Charybdis Carol every chance I get.

So --- one historical path or another --- I guess things are going to be all right.

And as Tiny Tim said, “Zeus bless us, every one!”

I love the way you imagine a world in which Sarah Palin believes in any other myths but her own.

Say what you will about Palin. But where else are we ever going to find a woman willing to give a hand job to an entire nation!

haha! Great Story-- this was a lot of fun to read!

This is the type of thing I find endlessly fascinating, the "What if?" questions of history. What if Archimedes had flunked math? What if people had wound up not at the top of the food chain, but several notches below hamster? What if dinosaurs had survived and sided with the British in the Revolutionary War?

And the biggest question of all: What if I stopped thinking about all this stuff and actually did something constructive? Nahhh!

Thanks again for your nice comment. I look forward to reading about more gods and goddesses in your blog!